Searchers for MH370 could be on the brink of their biggest breakthrough yet, thanks to a ground-breaking approach to calculating the plane's likely route. 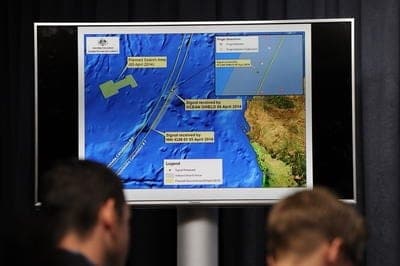 The search for MH370 is at a pivotal point, with expectations mounting that the plane’s black box and wreckage could be pinpointed within days.

And despite confusing signals from Prime Minister Tony Abbott and the search co-ordinators on Friday, there’s little doubt conclusive proof that the Malaysia Airlines flight went down in the Indian Ocean is tantalisingly close.

After a third set of acoustic signals were picked up by the Australian ship Ocean Shield, Prime Minister Tony Abbott said authorities were confident they knew the location of the black box.

“It’s been very much narrowed down because we’ve now had a series of detections, some for quite a long period of time,” he told reporters in Shanghai, where he’s working to sign a free trade agreement with China.

But moments later, the Joint Agency Coordination Centre (JACC) said there had been no breakthrough, and that an initial assessment of the sounds detected on Thursday afternoon by an RAAF AP-3C Orion aircraft had concluded they were “unlikely to be related to the aircraft black boxes”.

The pinger locator being towed from the Ocean Shield detected acoustic signals on Saturday and again on Tuesday, dramatically narrowing the once-massive search zone.

Adding to the view that the Ocean Shield is looking in the right place is JACC confirming that British ship HMS Echo has re-joined the Australian vessel in the northern part of the search zone.

HMS Echo has left behind Chinese ships about 300 nautical miles to the south, where the Haixun 01 reportedly detected pulse signals on Saturday.

Despite the encouraging signs that the Ocean Shield is zeroing in on MH370’s final resting place, there’s no official confirmation yet that the sounds detected on Saturday and Tuesday came from the ill-fated Boeing 777. The closest JACC came during the week was to say they were likely to be emanating from a man-made source.

The flight data and cockpit voice recorders are now considered to be within a roughly 20-kilometre radius, equating to a 1300 square kilometre plot of the Indian Ocean floor.

While that’s still a considerable area, it’s small compared to the 305,000 sq km area the search began with.

The latest pings are still being analysed, with the goal of using all of the acoustic data gathered so far to triangulate the plane’s position on the bottom of the sea in waters about 4.5km deep.

And they’re getting weaker because the black box beacon’s battery is several days past its usual shelf life.

The key question now is whether search teams now have enough information to pinpoint a location where they can deploy the Bluefin-21 autonomous underwater vehicle, that will attempt to find and photograph any wreckage.

But it moves six times slower than the towed pinger locator, so the latter continues to be used as long as the weakening signals can be heard.

For the Australian-led search to have got to this point – 26 days after it began – is truly remarkable considering no wreckage has been found.

JACC chief Angus Houston, the former chief of defence, has repeatedly stressed how difficult the task is, saying it is the most challenging recovery operation he has seen.

During press briefings, packed to the brim with media from around the world, he’s compared the case to Air France flight 447, which plunged into the middle of the Atlantic Ocean in 2009, killing all 228 people aboard.

While that disaster was also a baffling mystery, with its circumstances only becoming clear two years later when the black box was finally recovered, it was an easier recovery operation than that currently being undertaken.

Wreckage including the tail section was recovered from the sea within days of the accident, as were two bodies.

And that aircraft, an Airbus A330, had stayed on its course, Mr Houston pointed out.

MH370, on the other hand, went way off course shortly into its flight from Kuala Lumpur to Beijing, and despite hundreds of pieces of debris being spotted since, none have been confirmed as belonging to the missing plane.

The initial search focused on the South China Sea. After subsequent searches in the Strait of Malacca, Andaman Sea and northern Indian Ocean, the focus turned to the southern Indian Ocean, based on satellite data provided by Britain’s Inmarsat.

That crucial data was combined with information from Boeing and Rolls-Royce about MH370’s likely performance, speed and fuel burn rate to calculate its most probable route – a first in aviation history.

“If this does turn out to be the aircraft, it was a phenomenal feat of engineering and mathematics and data reduction that said, `this is where you should go look’,” US Navy Captain Mark Matthews told CNN.

“And you have to realise that the last known position of the aircraft was thousands of kilometres away.

“So to be able to do that based on just these intermittent hits with the Inmarsat satellite communications is phenomenal.”

Also unprecedented is the number of nations collaborating in the search, with even China and Japan putting aside tensions to work alongside each other.

Finding answers to the world’s most perplexing passenger jet crash is not only crucial for trying to prevent such a tragedy from happening again, but for the relatives of the 239 passengers and crew.

They may soon learn MH370’s fate and end the anguish of not knowing.

By Rebecca Le May

Commissioner Kenneth Hayne delivered 76 recommendations to reform the industry in February 2019. Almost two years on, the government has...

Growers in southern Queensland the latest to express concern as incentive programs attract only 500 applicants for thousands of seasonal...