Radical Australian preacher Feiz Mohammad has reportedly been cited by Boston bombings suspect Tamerlan Tsarnaev, with a YouTube user by that name believed to have shared videos of the controversial Muslim cleric online. 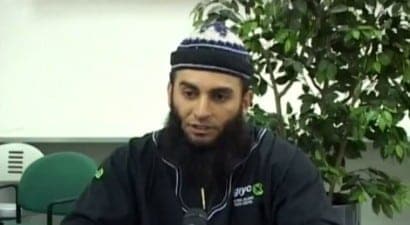 RADICAL Australian preacher Feiz Mohammad has reportedly been cited by Boston bombings suspect Tamerlan Tsarnaev, with a YouTube user by that name believed to have shared videos of the controversial Muslim cleric online.

Tamerlan Tsarnaev and his brother Dzhokhor have been accused of detonating two improvised explosive devices close to the finish line of the Boston Marathon last week, killing three and injuring over 140 participants and spectators. Tamerlan was killed in a shoot-out with police on Thursday night, while younger brother Dzhokhor was captured by police the following night.

A YouTube account belonging to a person with the name Tamerlan Tsarnaev shows views and shares of videos of sermons conducted by Feiz Mohammad, a Sydney-born cleric that has been accused of promoting a radical Islamic agenda. Mohammad was investigated by the Australian Federal Police in 2007 in order to determine whether videos of his sermons — titled the Death Series — broke Australian laws related to the incitement of violence and terrorism.

Mohammad has been described by experts as a fundamentalist Wahabbi, referring to the ultra-conservative branch of Sunni Islam practiced by al-Qaeda figures such as the late Osama bin Laden. Wahabbism has also been widely practiced in the Caucasus region of Eurasia, and is considered a driving force behind civil unrest in Tsarnaev’s native Dagestan.

Born around 1970, Mohammad was a former head of the Global Islamic Youth Centre in Sydney’s western suburbs. He fled Australia for Lebanon in 2005, shortly after coming to public attention after claiming that rape victims were solely responsible attacks against them.

Mohammad said: “A victim of rape every minute somewhere in the world. Why? No one to blame but herself. She displayed her beauty to the entire world… Strapless, backless, sleeveless, showing their legs, nothing but satanic skirts, slit skirts, translucent blouses, miniskirts, tight jeans: all this to tease man and appeal to his carnal nature. Would you put this sheep that you adore in the middle of hungry wolves? No… It would be devoured. It’s the same situation here. You’re putting this precious girl in front of lustful, satanic eyes of hungry wolves.”

Australian security expert Neil Fergus said that Mohammad’s extremist teachings were divisive within the Islamic community and not widely followed. However the rhetoric used by the Australian cleric reflected the type of fundamentalist ideology that appealed to potential terrorists. He said that any link between Mohammad and Tsarnaev would go a long way towards explaining the motivations behind the Boston bombings.

Fergus said: “That particular cleric is a lightning rod for radical Islamic thought. If one or both of them are following that it starts to create a picture of how they have gone from students, members of the wrestling team, to carrying out these heinous attacks.”

A Channel 4 documentary titled Undercover Mosque focused on Mohammad’s radical teachings with secret video footage showing the preacher encouraging children to become “soldiers defending Islam” and die as part of a global jihad. Mohammad made news again in 2010 after calling for right-wing Dutch MP Geert Wilders to be beheaded for his stance against Islamic fundamentalism.

26-year-old Tamerlan Tsarnaev was a champion boxer that had planned to compete for New England in the upcoming Golden Gloves competition, with many industry professionals believing that he had the potential to represent the United States of America at the next Olympic Games. Mohammad is also a former boxer, giving up the sport in order to take on a larger role within the Islamic community.

Mohammad, now studying Islam in Malaysia, has not commented on the terrorist attack in Boston.

Investigation into whether the Tsarnaev brothers were working alone are ongoing.

The explosion that tore through Beirut on Tuesday August 4 was so strong that shockwaves were felt on the island...

There's big money on the line with tonights draw, $4 million! Here are your Tattslotto results for Saturday, 8 August...

Company says chemical is safe and highly regulated in Australia. It requires “extreme negligence” to explode.

Of all frightening ways that the SARS-COV-2 virus affects the body, one of the more insidious is the effect of...

Central banks are stretched to the limit, trying to support the economy during the unprecedented COVID-10 recession. The Bank of...