The mayor of London, Boris Johnson, has been spotted enjoying an Australian holiday in far north Queensland. 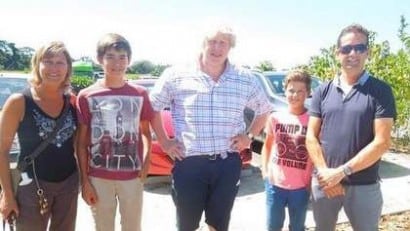 THE mayor of London, Boris Johnson, has been spotted by eagle-eyed holiday makers in far north Queensland, Australia.

The Mossman Gorge Centre is a gateway to the nearby gorge, located in the southern part of the Daintree National Park.

The Hartley family from Blackpool snapped a picture with the relaxed looking mayor, decked out in holiday attire of shorts and shirt.

They tweeted the picture with the caption: “Surprise / pleasure to meet @MayorofLondon at Mossman Gorge Oz today.”

Surprise / pleasure to meet @MayorofLondon at Mossman Gorge Oz today. Boris had no problem in joining us for a photo. pic.twitter.com/XVNHZl2Rrk

A spokeswoman from the Cairns Regional Council says staff weren’t aware Mr Johnson was holidaying in the area.

Mr Johnson has since been spotted in Kakadu in the northern Territory, posing for another photo which was published on ABC Darwin’s Twitter feed.