Barry O'Farrell's downfall is complete with the NSW premier having to return for a second day to give evidence before the ICAC after his shock resignation today. 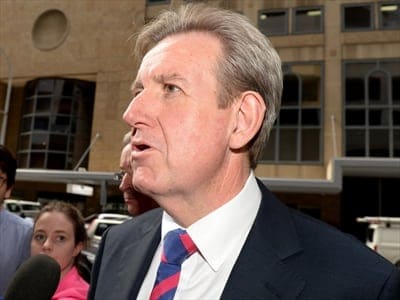 Barry O’Farrell was supposed to be rubbing shoulders with royalty on Sydney harbour and basking in the glow of another major infrastructure win for NSW.

Instead, a $3000 bottle of wine has led to his shock resignation as NSW premier on Wednesday.

And to cap off his horrible day, he was then forced to return to the Independent Commission Against Corruption (ICAC) to correct the record.

Mr O’Farrell on Tuesday told ICAC he could not recall receiving a bottle of vintage Grange bought by Liberal fundraiser Nick Di Girolamo and apparently couriered to his home just after the 2011 state election.

But on Wednesday morning, he called a press conference and revealed the corruption watchdog’s investigators had located a “thank you” letter signed by him and addressed to Mr Di Girolamo.

“I still can’t recall the receipt of a gift of a bottle of 1959 Grange,” a stony-faced Mr O’Farrell said.

“I can’t explain what happened to that bottle of wine. But I do accept there is a thank you note signed by me, and as someone who believes in accountability, in responsibility, I accept the consequences of my action.”

The outgoing premier expects to formally resign next week, when his replacement will be announced.

Anyone found to have wilfully given false or misleading evidence to the commission can be jailed for up to five years.

But Mr O’Farrell insists he didn’t lie, but had a “massive memory fail”.

He later told ICAC he was sorry for giving “inaccurate” information to the corruption hearing but maintained he didn’t remember the infamous bottle of red.

“It is a matter that I deeply regret as someone who has always defended this institution,” he said.

Mr O’Farrell has been a vocal supporter of ICAC.

Now he’s the second NSW premier to fall at its hands after Liberal Nick Greiner resigned in 1992 after being found to have acted corruptly over the Terry Metherell affair.

Mr O’Farrell was meant to be at a press conference alongside Prime Minister Tony Abbott on Wednesday morning to announce $2.9 billion worth of federal funding for western Sydney roads to support the new Badgerys Creek airport.

Instead, Mr O’Farrell sent a text message to Mr Abbott to tell him what was going to happen.

“I have enormous respect and admiration for Barry O’Farrell,” Mr Abbott said.

“He innocently, inadvertently misled ICAC yesterday and he has taken the utterly honourable decision.”

Mr O’Farrell, and his wife Rosemary, were due to greet Duke and Duchess of Cambridge and Prince George on the tarmac at Sydney Airport on Wednesday afternoon. He was then due to spend time with the royals at a function at Sydney’s Opera House.

Mr O’Farrell came to power in March 2011, pledging to rid NSW of the shady dealings that dogged Labor administrations.

No corruption allegations have been levelled against Mr O’Farrell.