Bananas in Pyjamas plead with Turnbull to protect ABC

A crowd-funded billboard in Sydney featuring Bananas in Pyjamas is pleading with Communications Minister Malcolm Turnbull to protect the ABC from funding cuts. 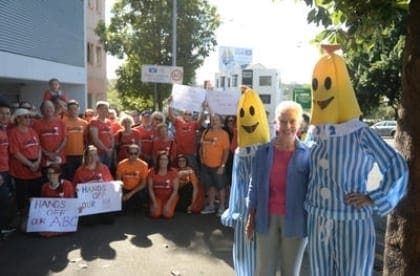 The ABC’s Bananas in Pyjamas have pleaded with Communications Minister Malcolm Turnbull to stop mooted funding cuts to the public broadcaster on a billboard in his Sydney electorate.

The hoarding at Rushcutters Bay, which shows the children’s characters looking distressed next to the message “Protect Our ABC”, is part of a crowd-funded GetUp! campaign urging the federal government not to slash the ABC’s annual $1 billion funding.

“We’re calling on Malcolm to save our ABC,” GetUp! director Sam McLean said on Thursday.

“The Liberal Party have been making moves to cut the ABC ever since they got into power.

“It’s time for Malcolm Turnbull to step up and end this talk of cutting the ABC.” The broadcaster has come under fire from Prime Minister Tony Abbott over its broadcast of allegations that asylum seekers were abused by the Australian navy.

“Politicians, whether prime ministers or communications ministers, will often be unhappy with the ABC … but you can’t tell them what to write,” he told Fairfax.

“It’s a great channel. Why would you get rid of it?”

“The ABC is as important as our national library.

TOP IMAGE: Former ABC Playschool presenter Benita Collings is joined by the Bananas in Pyjamas in front of a crowd funded billboard calling for the protection of the ABC, in the heart of Malcolm Turnbull’s electorate in Rushcutters Bay, Sydney, Jan 30, 2014. Prime Minister Tony Abbott took a swipe at the ABC’s reporting yesterday saying that the ABC seems to be on everybody’s side but Australia’s, in its reporting of recent events. (AAP Image/Dean Lewins) 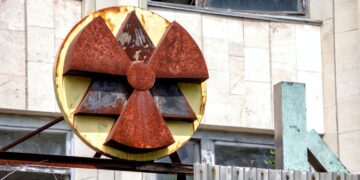 Radioactive waste from nuclear medicine facilities around Australia will be trucked to and buried near the South Australian town of...