Summer has made its presence known in Australia's southeast, ushering in scorching temperatures and prompting fire bans across the region. 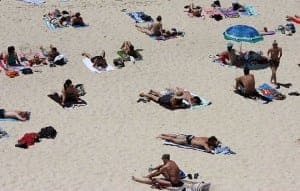 In NSW, the Bureau of Meteorology (BoM) is forecasting temperatures to reach more than 10C above average in some parts of the state over coming days.

On Friday and Saturday, temperatures in the early 40s are predicted over inland areas, including Wagga Wagga and Griffith, while Sydney is expected to usher in a high of 35C on Friday.

In Penrith and suburbs in the city’s west, maximums of 41C are forecast.

The highs mark the first heatwave of the summer and it will hang around in the state’s northeast into early next week, the BoM’s Regional Director for NSW Stephen Lellyett said.

“In the hot and dry conditions we are likely to see across the weekend, fires can move quickly and be difficult to control,” NSW Rural Fire Service Commissioner Shane Fitzsimmons said.

In Victoria, Melbourne’s CBD peaked at 39.9C early on Thursday afternoon but other areas of the state, such as Hopetoun Airport in the Mallee region passed 44.

Paramedics attended around six elderly people with heat-related illnesses, with all the cases described by the ambulance service as serious.

Trains also struggled to cope, with operator Metro cancelling just under 50 services on Thursday and Friday for safety reasons.

Tops of 44C are forecast for Mildura in the state’s north on Friday but Melbourne is predicted to experience a slight reprieve with tops of 29C and a shower or two developing from late morning.

Total fire bans have been declared for Friday in the Mallee, northern country and northeast regions of the state.

Further south in Adelaide, temperatures hit 43.4C on Thursday – making it the hottest day since January 17.

The State Emergency Service (SES) has issued an Extreme Heat Warning for Friday with tops of 38C forecast for the morning before temperatures are expected to ease over the weekend.

Health services have been putting out warnings ahead of the high temperatures, urging people to drink plenty of water and to keep a look out for heat-related illnesses.

It’s also going to be a tough time for animals across the southeast.

The RSPCA is reminding pet owners to be extra careful by putting out an extra bowl of water for their critters, ensuring they have access to shade, put zinc on fair-skinned pets and wait to walk their furry friends until temperatures drop. -AAP