The Terminator is now available as the new and improved Australian version.  Not only has 25-year-old won the pro title at World Fitness Federation Universe event, but Calum von Moger from Victoria, shares a likeness with the most famous body builder, turned Hollywood actor, Anold Schwarnegger.

Weighing in at 112kg, the once skinny kid, said it was a long journey for the family’s hobby farm in geelong, Victorian town to a modern-day Hercules and Mr Universe champion.

At 14 von Moger started lifting rusty old weights in an empty warehouse, motivated by the goal of one day being as strong as his older brother but he has manged to undergo an amazing transformation to be considered the most perfect sample of the male physique (apparently in the universe). 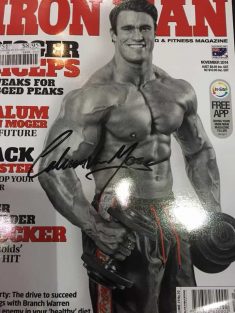 He says it has come down to a ‘pretty full-on’ training regime, which includes up to three hours of training – one hour of cardio and up to two hours of weights – six days a week and eating every two hours to ‘make sure (he) stays full’.

‘It’s pretty flattering of course to be compared to Arnold,’ he told Daily Mail Australia.

‘I’ve looked up some pics and I can see why people say their are similarities.

‘But I don’t want to be typecast as that or be in his shadow. The most important thing is to be yourself, whoever you are.

Von Moger won the bodybuilding pro title at the World Fitness Federation Universe event, held in La Ciotat, France.
The competition, which lasts about 10 minutes, is comprised of a posing routine, body rotation, eight mandatory poses and a one-minute ‘pose down’ to impress the judges. 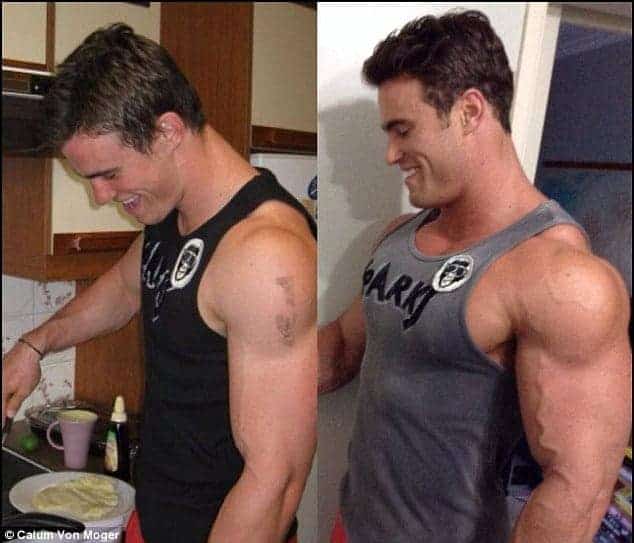 Big difference: The 25-year-old champion has transformed from a ‘skinny kid’ in 2008 (left), to muscle-bound in 2013 (right)
‘It was very rewarding – I’ve really sacrificed and focused on being in peak condition, so it’s great to get that recognition,’ von Moger said.

‘I’ve got one more event to go, the European championships in a few days, but after that i’ll have a little break.’