ANZAC Day 2014 | Australians have been warned not to allow the "romance" of war to overshadow its brutal reality. 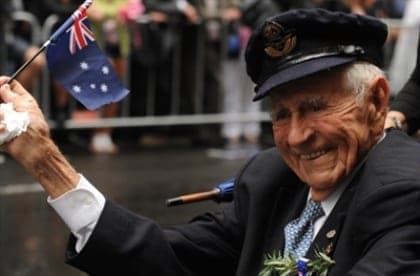 On Anzac Day, Australians have been urged to seek out and thank surviving World War II veterans as their numbers rapidly dwindle.

They have also been warned not to allow the “romance” of war to overshadow its brutal reality.

Returned and Services League (RSL) spokesman Bill Denny says August 5 this year will mark 100 years since the outbreak of World War One, heralding the beginning of the Anzac centenary period.

He says Australians will remember the enormous contribution made by the nation just 13 years after federation, the introduction of industrial scale warfare and the “brutal, unforgiving savagery and slaughter of it all”.

“We will not celebrate – we will commemorate,” Mr Denny told thousands at the Anzac Day dawn service in Adelaide.

“During this period we must be very careful not to allow the oft implied romance of war to overshadow the brutal reality, pain and loss that war delivers on the soldiers who serve and those that are left behind.”

Mr Denny said it was especially important this Anzac Day to remember surviving veterans from World War Two, mindful that the youngest will be in their mid-90s when the Anzac centenary ends in 2018.

One of those veterans, Bill Schmitt, 96, who served in the Middle East and also spent more than three years as a prisoner of war, said Australians had a shared responsibility to preserve, maintain and protect the nation’s peace and freedom.

“Those of us who were fortunate to survive long years in captivity remember with respect and love the great comrades we left behind in burial grounds throughout the Pacific and Japan,” Mr Schmitt said in a video address.

“Young men and women whose lives were so needlessly taken in circumstances never before experienced and never again, we trust, to be repeated.”

Another WWII veteran, Bill Atkins, said Anzac day was a time to think of his two sons, who had served in the Navy and who would take part in the march in Adelaide, and also his father who had been wounded in France during WWI.

Holding back tears, he said some memories still hit hard.

“Especially when I hear the ode and the Last Post,” he said.

“I think of some of the blokes I went to school with who didn’t come home. But that’s life isn’t it.”