Australian women respond to a Destroy The Joint Facebook call to action, #convoyofcleavage, after columnist Grace Collier criticises Prime Minister Julia Gillard for showing too much cleavage in parliament. 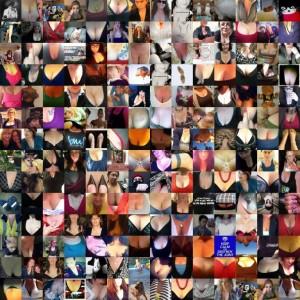 A RUSH of cleavage-shots have surfaced on social media as Australian women respond in outrage to one commentator saying Prime Minister Julia Gillard shows too much of her breasts in parliament.

After a week of personal attacks on Australia’s Prime Minister, women began sending in images of their own cleavage to the Facebook page Destroy the Joint using the hash tag #convoyofcleavage. The call to action came after columnist Grace Collier told ABC Radio National that it was ‘inappropriate’ for Gillard to show her cleavage in parliament.

Ms Collier make the comment during a panel discussion on ABC radio about last week’s Howard Sattler controversy. Ms Collier said: “It’s not something I want to see. In my opinion as an industrial relations consultant, it is inappropriate to be in Parliament, it is disrespectful to yourself and to the Australian community and to the parliament to present yourself in a manner that is unprofessional.”

Feminist and social commentator Eva Cox defended Ms Gillard on the show and criticised Ms Collier. Ms Cox said: “I think you are showing a considerable prejudice against a woman who dresses quite conservatively, very reasonably.”

Jenna Price, spokesperson for the Destroy the Joint Facebook page and a media academic at Sydney’s University of Technology, said she was building up a collection of images of women’s breasts to be sent to Ms Collier.

News.com.au have reported that whilst spokespeople for Julia Gillard have not commented on the matter, a senior Labor source said Ms Collier “should crawl back into the gutter she came from.”