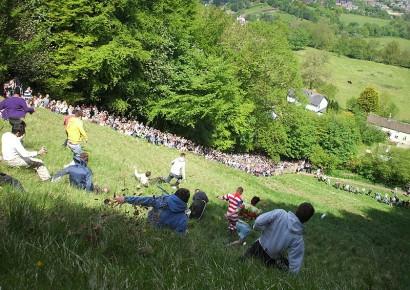 AROUND 3000 spectators descended on a steep hill near Brockworth, Gloucestershire, on Monday to witness a now world-famous annual cheese-rolling event.

A long held tradition dating back to the 1800s, participants defy health and safety warnings to chase a wheel of cheese 200 metres down Cooper’s Hill.

In this year’s event a foam cheese wheel replaced the more traditional 8lb piece of Double Gloucester after organisers were told they could face legal action in case of an accident.

This year, an Australian traveller, Caleb Stalder, 30, took out the title in the second race of the day.

Mr Stadler, from Taree, NSW, now lives in London. He told the BBC he was not expecting to win the prize.

“You can’t control yourself whatsoever so it’s a case of rolling down and seeing where you end up,” Mr Stadler said.

“I can’t believe I got the cheese. It’s awesome. I wasn’t anywhere near being first down and the cheese took a bit of a turn and I caught it.”

The opening race was won by an American daredevil in a stars and stripes morph suit, who had travelled more than 4,000 miles from Colorado Springs to take part.

Kenny Rackers, 27, told the BBC he had come to the UK to participate in the race.

I trained a long time for this and got hurt on the hill practising. I came three days early and I took a bad spill, but I came to win and that’s what I did,” he said.

The woman’s race was won by Brockworth local, Lucy Townsend, 16.  Local Ryan Fairley took out the third men’s race, and Tomoaki Tanaka from Japan claimed the fourth men’s race dressed as a ninja.

The event was held unofficially, following the cancellation of the 2009 official event after more than 15,000 people turned up as spectators to watch.

Highlights from the 2013 cheese-rolling festival: