AUSTRALIAN ELECTION 13 | Prime Minister Kevin Rudd and Opposition Leader Tony Abbott have made their YouTube music debut alongside a host of Australian politicians, starring in Canberra band Super Best Friends clip for their latest single ‘Round and Round’. 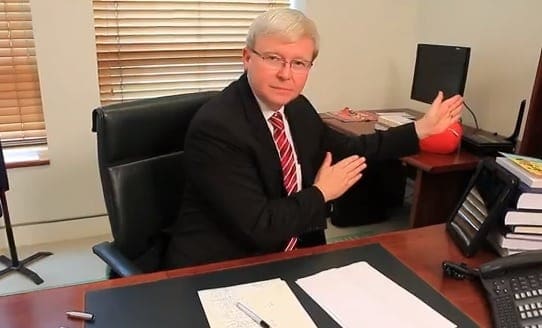 “WAKE up they’re already there, messages pre-prepared,” starts the latest single ‘Round and Round’ from Canberra punk band Super Best Friends.

“On screens and frequencies, it’s news but not really.

“Next to him, next to her, messages well rehearsed,

“They’re the bait, here’s the line, a waste of breath filling time.”

The song seems to be an incisive comment on the dull, cyclical and pre-planned nature of political news in Australia and the tendency for politicians to communicate only in sound bites and scripted debates.

Ironic then, in making the video for the tune, Super Best Friends managed to convince the who’s who of Australian politics to join in the fun – dancing and lip-syncing along to the words.

Scenes of independent senator Nick Xenophon rocking out on an electric guitar and retiring independent Rob Oakeshott ironing his boxers at his desk are intercut with shots of the everyday storm of press conferences, doorstops and campaigning.

Other notable appearances include Bob Katter in trademark hat trying to spin a lasso, succeeding only in catching himself on the head, and Greens Senator Sarah Hanson-Young engaging in a spot of headbanging.

Prime Minister Kevin Rudd also features, with some impromptu sitting dance moves. Tony Abbott, the last to sign up to the video, turns the pedals on his bike and mouths the words ‘Round and Round’ with a distinct lack of enthusiasm.

Kevin Rudd tweeted a link to the video and said: ‘Good thing this election isn’t determined on our ability to dance.’

The band have posted the video to their website with the caption: “This is the best thing you’ll see from the pollies this election campaign.”