Australian man sets world record after running around the world

Australian man Tom Denniss has become the fastest person to circumnavigate the world on foot after running on average a marathon a day, every day, for 622 days. The 26,000 km charity run raised money for Oxfam. 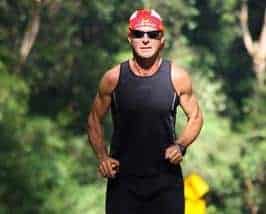 This is what it took for ultra-marathon runner Tom Denniss to become the fastest person to circumnavigate the globe entirely on foot, beating Danish man Jesper Olsen who set the record with 662 days in 2005.

The Sydney man began his journey on December 31, 2011 from the Sydney Opera House, finishing at the same spot on Friday after a quest which took him across five of the world’s seven continents.

Mr Denniss undertook the challenge of running a marathon a day to raise money for Oxfam. He received over $44,000 in donations during his journey.

“I never really thought about giving up,” he told the ABC this morning on his way through Sydney to complete the run.

“[My body] feels stronger now than when I started. I think I’ve just got used to it.

“It’s not the thing that most people are ever going to undertake, but if you do, I think you’ll find the body will adapt very well.”

He was supported in his journey by the constant presence of his wife Carmel, who was also the trip’s official photographer.

Various friends and family members also joined him at different points during the attempt.

“It would have been virtually impossible to do it without them. That’s why it hasn’t feel like we’ve been away from home for that long, when you’re seeing friends and family along the way it makes it so much easier,” Denniss told news.com.au at the completion of the journey.

Mr Denniss said the journey had taught him to look at the world in a different way.

“A lot of people thought I would take note of how large the world is, but feels smaller now. The world doesn’t seem to be as big now that I’ve run around it,” he told the ABC.

“The highlights have been along the lines of the geographical aspects – the Grand Canyon, running along the rim, running through Monument Valley … over the Andes.

“The real highlight was running across the Nullarbor with [my wife] Carmel and some other friends.”

“I’m just going to relax and see what I feel like doing,” he said when asked what his next plans were.

“As far as athletic challenges go, I’m just going to let that one come naturally.”