The Queen's new coach is decorated with gold leaf and jewels and displays an intricate amount of detail reflecting more than 1000 years of British history... and it's made in Australia. 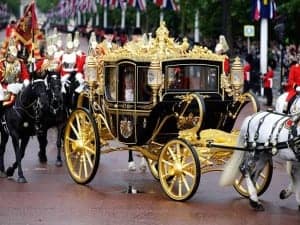 Assemble an Australian bunch of patriotic petrol-heads and one specialized coach builder and the result is the Queen’s (very) shiny new coach.

Jim Frecklington, of Western Sydney, and his team devoted a decade to the design, construction and decoration of the Queen’s Diamond Jubilee State Coach.

The coach is not only decorated with gold leave and jewels but displays an intricate amount of detail reflecting more than 1000 years of British history.

These astonishing artefacts include actual pieces of the Lord Nelson’s HMS Victory warship and even a piece of a Bronze Age boat.

Bits of the apple tree that originally inspired Sir Isaac Newton’s ideas of gravity, a musket ball recovered from the battle of Waterloo and even a bolt from a Spitfire all adds to the significance and uniqueness of this specific coach.

Among the 50 participants in getting the coach Queen-ready was Terry Sainty, a member of the famous Sydney drag-racing family, who created the spokes, rims and wheels in their old factory near Windsor (Australia).

“They are made from extremely strong and light aero-grade aluminum and use the technology we use for our drag racing,’’ Mr Sainty, said on Tuesday.

“Working with Jim was amazing, he’s a very smart man.

“With Jim [Frecklington] it’s all done just by talking. No plans or diagrams or drawings, he just went around the world looking at wheels,” added Sainty.

Parkes-born Mr Frecklington trained in coach making and looked after horses at Buckingham Palace before returning to Sydney.

The master coach maker originally intended to deliver his exceptional coach to Her Majesty the Queen for her 80th birthday present in 2006, but was unable to finish it in time.

Financing the build was a controversial issue with tax payers after former Australian Prime Minister John Howard contributed $250,000 to the project but this was insufficient. In 2012 Mr Frecklington wrote to Labor PM Julia Gillard asking for another $5 million to finish the coach and transport it to England.

His request was rejected.  Nevertheless he made it work and in March this year Buckingham Palace confirmed the coach had reached London.

Her Majesty travelled to the opening of parliament on Wednesday in the new state coach.

Speaking from London on Tuesday, Mr Frecklington said, “It will be a very special day to see this coach being used.”

“This new coach will give me a lot of pleasure and will also give a lot of Australian and British people pleasure because there are so many people who have so much connection with it,” he added.