Protesters have warned Australians would be targeted unless Indonesia receives an apology over the phone tapping scandal. 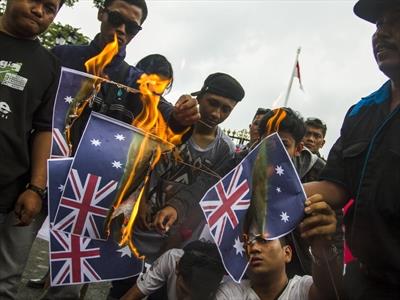 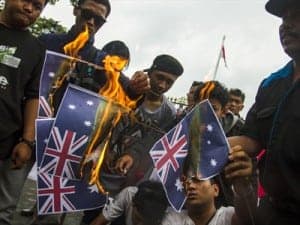 PROTESTERS burned flags and threatened to target Australians living in Indonesia as tension over the phone tapping scandal boiled on Jakarta’s streets.

Some hardline protesters even called for war during a protest outside the Australian embassy in Jakarta on Thursday as Prime Minister Tony Abbott told parliament in Canberra he wanted “Australia to remain Indonesia’s trusted partner now and in the future.”

Mr Abbott said he would respond to the letter he received from Indonesian president Susilo Bambang Yudhoyono who has sought an official apology and a full explanation as to why Australian spies targeted his mobile phone, as well as those of his wife and some of his closest confidants, in 2009.

Protesters also demanded an apology, with one activist from Pemuda Panca Marga, a group representing children of Indonesian veterans, warning Australian citizens in Indonesia would be targeted.

“Within 24 hours, if the Australian government does not apologise, we’re ready to attack this place. We’re ready to sweep Jakarta for Australians,” he said.

Anti-Australian sentiment was palpable on the street outside the embassy.

One banner held by protesters read: “PPM, GM, FKPPI Ready!!! War with Australia”, while graffiti on the road and the wall of the embassy read: “Mr Abott (sic) is stupid” and “F… you Ausi”.

Another Pemuda Panca Marga member called for police to allow protesters into the embassy.

“We want the ambassador to get out of here. Get out of Jakarta. Police, please let us climb this fence for us to get in.”

Australian travellers in Indonesia have been warned to avoid rallies.

Mr Abbott has ruled out apologising, saying only that he regretted the personal hurt caused to Dr Yudhoyono by media reports on the claims and on Thursday reiterated his desire to maintain strong relations with Indonesia.

“As always my intention is to do everything I reasonably can to strengthen the relationship which is so important to both our countries,” he told parliament.

Cooperation on tackling people-smuggling and the sharing of intelligence and military exercises have already been halted.

And Indonesia’s trade minister Gita Wirjawan warned his country might suspend talks on a comprehensive economic partnership agreement with Australia.

“We must guarantee that we are comfortable in our communications (with Australia),” he said on Thursday.

But he said Australian cattle imports would continue.

“The seriousness of this matter, or the sense of offence that our Indonesian friends are feeling, means that we must redouble our efforts to return to positive and construction dialogue between our governments,” Mr Shorten told parliament.

Professor Tim Lindsey, an expert in Australia-Indonesia relations at the University of Melbourne, told AAP only a formal apology would be acceptable.

“It’s a matter of personal insult to the president himself and his wife,” he said.

“Unless Tony Abbott comes up with a form of words that the president can present in public as something constituting an apology of sorts then the dispute will not be resolved.”

Labor on Thursday attempted to use a senate estimates hearing to ask foreign affairs officials about Indonesian policy, but Attorney-General George Brandis blocked the questions saying it was a “very delicate time”.