In the fourth fatal Australian crocodile attack this year, a fisherman was killed by a giant reptile in front of his wife. 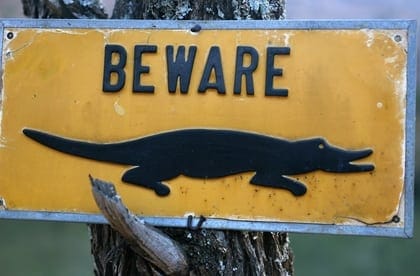 A 4,5 meter saltwater crocodile struck in the shallows of the Adelaide River near Darwin when a 57-year-old fisherman waded into the water to un-snag his fishing line.

The man’s wife witnessed the gruesome attack on Sunday. She says she heard his screams and turned around to see “”a tail splashing in the water” reported officials.

The body of the man was found a few hours later after the crocodile was shot by police.

Officials said that the man was attacked in an area close to where cruise boats feed chickens to the saltwater crocs so that tourists can get a closer look at the apex predators.

Another crocodile in the area, known as Brutus, made headlines just a few weeks ago when he was photographed attacking a bull shark.

Tour operators have said, though, that their croc feeding is not to blame for the attack.

Morgon Bowman of Adelaide River Cruises told the ABC: “We get asked, ‘Where’s a safe spot to fish?’. We tell them there are no safe spots. If you are a Territorian you know not to go in the water.”

The Australian Saltwater Crocodile has been a protected species in Australia since 1971. Earlier this year the government rejected plans to allow crocodile hunting once again.