AUSTRALIAN ELECTION 13 | Australians will go to the polls on 7 September, Prime Minister Kevin Rudd has announced. 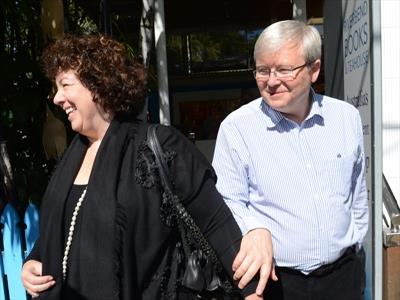 AUSTRALIANS will go to the polls on 7 September, Prime Minister Kevin Rudd has announced.

“It’s on. A few moments ago I saw the Governor-General and asked that she dissolve this parliament and call the federal election for 7 September,” he said in an email.

“Australians now face a choice. And the choice couldn’t be starker.

“I have a positive vision about the country we can be.

“In this election I’ll be talking with Australians across the country about better schools for our kids, investing so we can create good jobs, and about how the NBN can help keep our economy strong.”

The prime minister flew into Canberra from his hometown of Brisbane about 2.38pm and arrived at Yarralumla around 3.10pm.

Mr Rudd appeared to downplay the likelihood of a 7 September election on Saturday when he told reporters he wanted to attend the G20 summit in St Petersberg just days before.

But on Sunday he announced Victoria had signed on to the schools funding deal, and Western Australia on to the national disability care scheme. – AAP