Australia House has traditionally attracted one of the largest turnouts for Australians voting overseas, and in this year’s federal election it was no different. 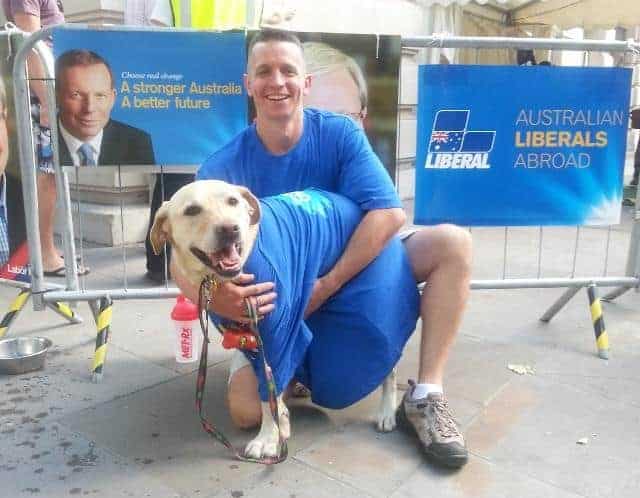 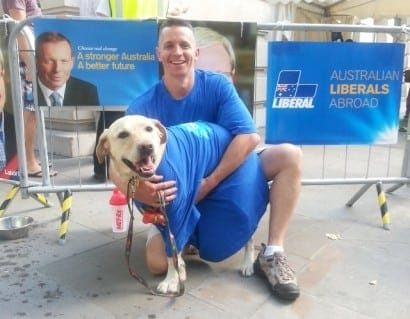 Australian Liberals Abroad volunteer Roland Marsden and Achilles the Labrador handed out How To Vote cards outside Australia House.

AUSTRALIA House has traditionally attracted one of the largest turnouts for Australians voting overseas, and in this year’s federal election it was no different.

Final numbers are not yet known for the number of Australian travellers and expats who passed through the polling booth, however anecdotal evidence suggests a steady flow over the two weeks the doors were open for prepolling.

In the 2010 federal election over 16,000 Australian voters cast their votes at Australia House, making it the largest polling station in the election.

Many Australians living in the UK or passing through on holiday made a deliberate effort to head down to the station in person to cast their vote, commenting on the fact the camaraderie of the experience made it feel like polling day back home.

Australia House is historically a strong polling station for Labor and the Greens, reflecting the traditionally progressive nature of the expat community, dominated as it is by younger voters.

However, it seems even expat Australians were not immune from the voter concerns which dominated the Australian federal election this year, with a swing towards the Liberal/National Party evidenced amongst 100 voters polled for an Australian Times exit poll on Thursday before the election.

By around 12.30pm on Saturday, Australians in the UK learnt of the outcome of the 2013 federal election, with prime minister Kevin Rudd conceding and Tony Abbott’s victory speech being broadcast on UK’s BBC News.

At the reception for Australian Liberals Abroad volunteers and friends held at a venue near Battersea Power Station on Saturday morning, a beaming Jason Groves thanked his team of volunteers as the results came in, declaring the result in London the best ever for the coalition.

Earlier Mr Groves told Australian Times how delighted he was with the exit poll numbers suggesting a clear margin lead for the coalition in the primary vote for the first time in the UK — 39 per cent to 35 per cent.

The UK branch of the ALP party, ALP Abroad, hosted their own election party at the Coach Makers Arms in Marylebone, with lamingtons for guests.

Despite the outcome ALP Abroad president Paul Smith said the mood was festive.

“Labor is in a position to come back strong in the next three years, and we will,” Mr Smith told Australian Times.

“Labor is proud of the fact it had the best economic record in the world in responding to the GFC, ensuring people kept their jobs and increased living standards.

“For Australians living in the UK this outcome means they will probably not be able to return home to the same guarantee of getting a job and the same economic conditions Labor has provided over the past six years.”