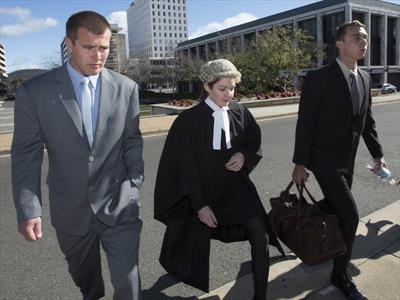 Daniel McDonald, now 21, and Dylan Deblaquiere, 20, went on trial last week after McDonald had sex with a fellow military recruit in March 2011 and broadcast it live on Skype to Deblaquiere’s room.

The jury in their ACT Supreme Court trial found both guilty on Wednesday of using a carriage service in an offensive manner and McDonald guilty of committing an act of indecency.

McDonald’s counsel had argued the victim, who cannot be named for legal reasons, was aware she was on webcam and repeatedly looked at a nearby open laptop during sex.

But the woman, now 20, insisted she didn’t give McDonald permission to use Skype to transmit their tryst to the nearby room where other cadets were watching.

The court was told she and McDonald had entered a “friends with benefits” arrangement, with rules including that no one should know about their sexual relationship.

She admitted she had consensual sex with McDonald and knew she was breaking college fraternisation rules by doing so.

But she told the jury she was shocked after discovering she had been broadcast having sex.

“I broke the rules, yes, but I did not agree to be filmed or violated in the way that I was,” she said during the trial.

She was told about the live transmission by a senior military investigator two days after it occurred, and after learning inquiries into the matter had stalled, the woman granted a television interview.

Hours after that television interview, she met with ADFA commandant, Commodore Bruce Kafer.

“We discussed the fact that I had gone to the media and basically he told me how much trouble I had caused,” the woman said during the trial.

She told the Ten Network justice had been served and she could move on.

The prosecution reportedly plans to seek prison terms for the pair, who will be sentenced on 14 October.

“From her pain and suffering, which must have weighed heavily on her over the past two years, and from her bravery coming forward, we have seen real reforms in the way the thousands of victims of abuse in the military are treated,” he said in a statement.

Mr Briggs said the government took positive steps by establishing a number of inquiries, the Defence Abuse Response Taskforce and the Reparation Scheme.