Australians in the New South Wales (NSW), and even the “Sunshine state” Queensland, pulled out extra warm woolies as a blanket of snow covers several parts of the region.  The adverse weather is expected to last into next week and is some of the coldest weather in decades, thanks to an icy cold snap.

Ipswich councillor Paul Tully drove three hours across the border so his son could see snow for the first time.

“We got up at 2.30am in the morning because there’d been a number of false starts in the past to take him to see his first snow,” Mr Tully told the BBC.

“Everyone was actually excited it was a joyous occasion, people just felt really good.”

The cold snap has been dubbed the “Antarctic vortex” by Australian media, but the Bureau of Meteorology said the name was not actually accurate.

“It’s fun to say,” forecaster Sean Fitzgerald told the BBC, “but an Antarctic vortex is actually a weather system over Antarctica that doesn’t shift.”

Dalby and the Toowoomba-Wellcamp airport had the coldest overnight temperatures, with the mercury dropping to 1 degree Celsius.

Brisbane is experiencing westerly winds of 30 to 45 kilometres per hour which will make it feel much colder than the 16degrees forecasted.

Up to 100 millimetres of rain was expected to fall in East Gippsland early this week as an intense low pressure system forms in the Tasman Sea, east of Gabo Island. This will drive strong southerly winds and rain into southern and mountain districts, Melbourne-based senior forecaster Phil King said.

Severe weather warnings are in place for Victoria and NSW, and icy conditions have closed some major roads, including parts of the Great Western Highway.

Alpine regions and ski resorts saw good snow fall at the weekend with a light dusting also experienced in the Central Tablelands region of NSW.

SES region controller Craig Ronan said while the weather was easing in most areas, Oberon could get more snow on monday night.

“The roads are slowly reopening as the weather improves,” he said.

“It’ll probably ease this afternoon but again if we get rainfall overnight, it’ll be likely we see more snow in the Oberon area again overnight.” 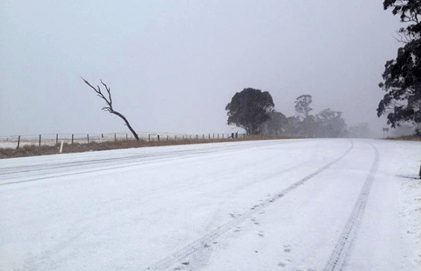 Renee Howard sent us a picture of the New England Highway right now near the Ben Lomond turn off – don’t often get to see it looking like this! Thanks Renee!