Australian bombing in Iraq may kill own citizens, admits Abbott

Prime minister says fighting for Islamic State (ISIS) is “against God” and joining them “may well become much more dangerous because of the presence of Australian forces.” 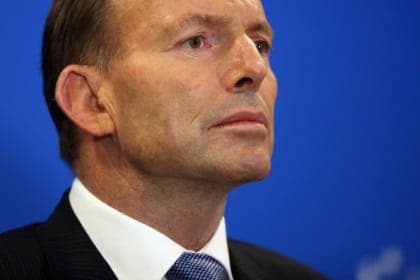 On Monday, the prime minister said that one of the main reasons for Australia joining the US in military action against the ISIS jihadist organisation which he has described as a “death cult” was that many Australian citizens were fighting for them in Iraq and Syria.

He described joining militant jihadist groups as being “against God” and acknowledged that Australian citizens who are fighting with ISIS could be killed in strikes carried out against the organisation by Australia.

“These are ideologues of a new and hideous variety who don’t just do evil but they exalt in doing evil,” Mr Abbott said.

“Now, if they (Australian citizens) are killed in conflict, they know the risks, they took their chances. They broke Australian law. They are doing something which is a very serious offence under Australian law and I say again to any Australian who might be thinking of travelling to the Middle East to join in terrorist activity: don’t. It is very dangerous. It is wrong. It is against God. It is against religion. It is against our common humanity … and it may well become much more dangerous because of the presence of Australian forces.”

Mr Abbott said that the aim of joining the US in the forthcoming military action, as proposed by US President Barack Obama, was to dislodge ISIS and to “work with the Iraqis, to work with Kurds to ensure that they are able to keep their people safe”.

Speaking to the ABC about his broader vision of the world and the objectives of foreign policy, the prime minister said, “Over time, I would hope to see a world where the golden ethical rule – do to others as you would have them do to you – is better accepted,” he said.

“I would like to see, over time, an understanding by all people and cultures, and religions, that there should be separation of church and state, that there is a sense of rendering unto Caesar what is Caesar’s and to God what is God’s.”