London lunch-timers enjoyed a game of beach volleyball on a court of golden Australian sand. 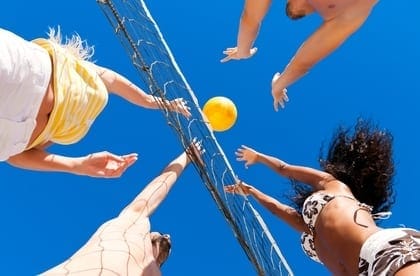 Covent Garden was transformed into a beautiful sandy Australian beach on Wednesday to give Londoners the opportunity to pit their beach volleyball skills against Britain’s best.

British beach volleyball Olympians  Zara Dampney and Lucy Boulton invited the public to join them for a game.

More than 60 tonnes of beach sand were used to transform the Covent Garden piazza into a chilling afternoon Australian beach vibe, with the help of Aussie beer brand, Foster’s.

At the 2012 Olympics beach volleyball was one of the most watched sports; even government officials loved it and bought almost twice the number of tickets to watch volleyball than athletics.

Hopes are that the interest shown on Wednesday and at the Olympics might convince decision makers to include beach volleyball in the 2018 Commonwealth Games which will be hosted on the Gold Coast in Australia.

“It’s great that people have started to recognize beach volleyball, especially since the Olympics. All we’ve got to do now is keep that momentum going and hopefully you’ll be seeing us at Gold Coast 2018,” said Zara Dampney.

Speaking for Foster’s, who brought the beach to London on Wednesday, Marketing Manager, Emma Sherwood-Smith said, “We believe that a world with more beach volleyball is a better world, so we’re campaigning for more of this great sport, starting with the Covent Garden beach volleyball court…now that’s a good call!”