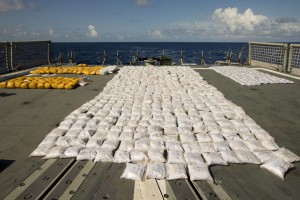 1023 kilograms of heroin, with a street value of more than £140 million, was recently seized in a spectacular collaborative effort between the Australian and British navies.

This international operation known as the Combined Maritime Forces (CMF) is a naval partnership between 30 nations.  Their combined resources and efforts mean that more than 4 million square kilometres of international waters can be patrolled in a continued onslaught against drug trafficking, funding organizations such as Al-Qaeda and the Taliban.

Blunden, Commodore of the HMAS Darwin — an Australian war ship with 24 Royal Navy personnel on board – says that pinpointing a dhow, or sailboat, in such a vast area as is being covered by the CMF is a huge task.  Using the HMAS Darwin’s high-tech surveillance abilities the drugs were found on a dhow approximately 60km’s off the Kenyan coast.

“This is the sixth seizure of heroin by the Combined Maritime Forces since January and is by far the largest ever made by the organization,” said Blunden, commander in charge of the operation.

HMAS Darwin’s Commanding Officer, Commander Terry Morrison, said the seizure puts a major dent in terrorist funding networks; “This is a major heroin seizure, which has removed a major source of funding from terrorist criminal networks. The search tested the steel of Darwin’s boarding parties who were working in difficult conditions throughout the night.”

Victoria is expected to participate in the most anticipated event of the year.

Gayle and Mac Shann's love is truly what one wishes for. The couple reflects on life together now.