Australia will not have a minority government says Rudd, Abbott

AUSTRALIAN ELECTION 2013 | Labor and the coalition say there won’t be any minority government deals after the Australian federal election. 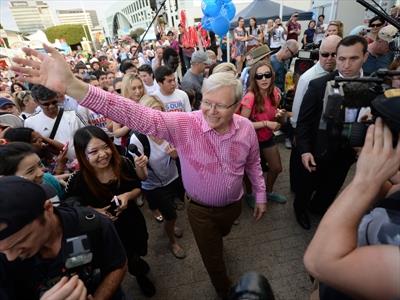 AUSTRALIA could face a constitutional crisis if the federal election is tied, after leaders Kevin Rudd and Tony Abbott both ruled out forming another minority government.

On day 10 of the election campaign, the Labor prime minister echoed the opposition leader in pledging no deals with crossbenchers if the 7 September poll result was similar to 2010 when the major parties won 72 seats each.

If neither Mr Rudd nor Mr Abbott can confirm to the governor-general they have the confidence of a majority of MPs, a fresh election is likely.

However, Labor is in preference talks with the Greens, other minor parties and independents on a seat-by-seat basis before the close of nominations on Thursday.

Mr Abbott on Wednesday underlined his opposition to minority government by announcing the Liberals would put the Greens last on all 150 lower house how-to-vote cards.

No snapback: Reserve Bank no longer confident of quick bounce out of recession

“I believe in doing the right thing by our economic strength, by our cost of living, by our job security,” he said.

“I’m going to put the Greens last. Mr Rudd, what are you going to do?”

Mr Rudd declined to comment, saying it was a matter for the ALP organisation.

But he took issue with Mr Abbott’s economic credentials, saying the coalition owed it to voters to release its policy costings including proposed cuts to services.

“When asked today whether all that work had been done on their spending promises and their cuts, (shadow treasurer Joe Hockey) said: `Yes it had’,” Mr Rudd said.

“Why on earth is Mr Abbott not releasing it today?”

As he did in Tuesday, Mr Hockey said the coalition was dealing with costings “methodically, carefully, prudently”.

Treasurer Chris Bowen said there were provisions for all of Labor’s policies in the Pre-Election Economic and Fiscal Outlook prepared by Treasury and Finance.

“They don’t have a different philosophical view. In fact, both Kevin Rudd and Tony Abbott could be sitting in the same car, looking in the same rear-vision mirror,” she said.

Mr Rudd is understood to have spoken with Mr Katter before the campaign began and Liberal federal director Brian Loughnane has held talks with the Kennedy MP.

“He shares with Kevin Rudd and I a passion for Queensland and that passion will actually make sure that Queensland is given the sort of recognition it should … in the national capital,” Mr Beattie said.

Mr Katter, whose party could pick up a Queensland senate seat and poll strongly in regional parts of the state, says he’s not leaning towards any party when it comes to preference swaps.

Both major party leaders spent the day in Queensland.

Mr Abbott joined Queensland Premier Campbell Newman on a visit to state police headquarters for a briefing on border security in the Torres Strait.

Mr Rudd was in Cairns to announce $209.8 million in funding for 137 new trades training centres in schools across Australia, before heading to the Royal Queensland Show in Brisbane to greet voters. – AAP

Australia’s long-awaited cybersecurity strategy, released yesterday, pledges to spend A$1.67 billion over the next ten years to improve online protection...

Democrats in Congress want to send US$1 trillion to help out states and cities in their version of the relief...