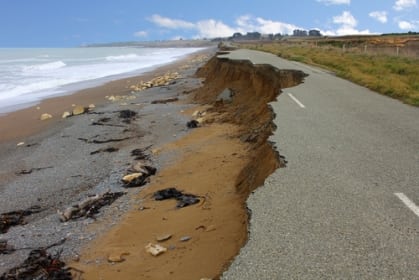 The report, released this week, estimated that within the next century  the Australian coast could lose as much as 40 – 100cm to rising sea levels.

Lead author of the report, Professor Will Steffen said Australia can expect to lose anywhere between three tenths of a percent and 9 percent loss of gross domestic product per year unless the government takes action to counter the effects extreme weather events and rising sea levels are having on the Australian coast line.

The report also stated that unless more is done by the Federal Government to counter the effects of climate change, Australia will lose billions to infrastructure within the next century. The report went further to state that the southeast corner of Queensland and Sydney would be hardest hit by rising sea levels.

Professor Steffen pointed out that, “A wide area of infrastructure will be also at risk since 75 percent of Australians live near the coastline.

He added that these at-risk areas would see, “a one-in-100-year flood every few years toward the end of the century, and suggested that infrastructures should be designed to withstand the effects of rising sea levels.

Steffen added that while property developers and infrastructure planners continue to ignore the effects of rising sea levels, the impact of global flooding will, at the present rate, cost the world’s countries US$ 1 trillion a year by 2050.

John Hunter, an oceanographer at the Antarctic Climate and Ecosystem Cooperative Research Centre, told the Sydney Morning Herald that Sydney is prone to storm surges and high tides.

He agreed with Professor Steffen’s assessment that places like Hobart and Sydney are at risk of sea level rises if carbon emissions continue to heat up the planet at the current rate.

Reports say that the world’s sea levels currently rise at a rate of 3.2 millimetres a year, and have continued to do so for the past 20 years.

The report by The Climate Council warned that rising sea levels could ultimately impact on home insurance rates as the world, and that the Australian coast line will become more eroded and less stable.