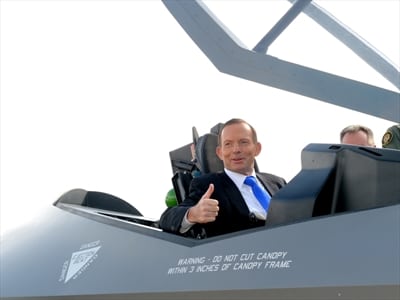 You never know what’s around the corner. That’s why Prime Minister Tony Abbott wants to spend $12.4 billion on a fleet of armed stealth jet fighters.

“You just don’t know when you might need powerful defence capability,” he told reporters in Canberra on Wednesday as he confirmed the purchase of an additional 58 Texan-built F-35 jets.

They boast a top speed of 1960km/h, fire air-to-air missiles, guided bombs and a cannon using the most sophisticated avionics and sensors.

To use the words of the US Pentagon official in charge of their development: the F-35 Joint Strike Fighter is built on the premise that it will see first, shoot first and kill first.

Mr Abbott defended the government’s decision by citing the unexpected need in 1990 to send a substantial military force to East Timor, Australia’s contribution to the invasion of Iraq in 1999 and a decade-long military commitment in Afghanistan.

“You just don’t know what’s around the corner,” he said.

Because the world remained a difficult and often dangerous place, “sensible” countries had to have military forces capable of dealing with foreseeable contingencies.

In any event, successive federal governments have been squirrelling away funds for the program.

The $12.4 billion was not new money and would have no impact on the already-tight May budget, Mr Abbott said.

The price tag includes associated weapons and training and $1.6 billion in classified upgrades for Royal Australian Air Force bases Williamtown in NSW and Tindall in the Northern Territory.

While Mr Abbott hailed bipartisan political support for the program not everyone in his government is impressed.

He claimed recent tests of the jets in the US had revealed significant problems.

“We should be ensuring that this aircraft is defined as fit for purpose before we purchase it,” he told Fairfax Media, suggesting the need for a full capability analysis.

Mr Abbott, in describing Dr Jensen as an expected “outlier”, said there would be disagreement always over defence spending.

Defence Minister David Johnston is an unabashed fan of the F-35, predicting it will dominate the skies for at least 10-15 years.

“This aircraft is peerless, it has no identifiable rival in the air at the moment,” he said.

Fourteen of the jets were ordered by the previous Labor government in 2009 and the coalition plans to stagger its order of 58.

The F-35 jets will replace the retiring FA-18 Hornets which will have been in service for three decades.

Each new jet will cost about $90 million, a figure Senator Johnston expects to decline over time as production ramps up.