A United Nations treaty co-authored by Australia and designed to restrict the sale of illegal arms in the global marketplace has been signed by Junior Defence Minister Mike Kelly in New York City earlier this week. 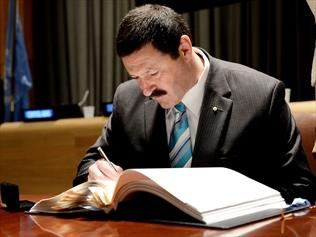 A UNITED NATIONS treaty co-authored by Australia and designed to restrict the sale of illegal arms in the global marketplace has been signed by Junior Defence Minister Mike Kelly in New York City earlier this week.

The Arms Trade Treaty (ATT), which has been agreed to by sixty other countries, will prevent ratifying nations from supplying conventional weapons to countries where they would be used to commit war crimes or genocide. This would include the sale of assault rifles such as the AK-47, which is commonly used in conflict-ridden regions due to its low cost.

The United Nations treaty would require nations that are involved in the arms trade to engage in a rigorous risk assessment process before any transfers could occur. They would also be required to regulate arms deals to ensure that the weapons are used for their stated purpose upon delivery.

Junior Defence Minister Mike Kelly said that around 2000 people died every day in conflicts that are propped up by the illegal sale of weaponry. Dr Kelly, signing the agreement on behalf of Foreign Minister Bob Carr, said that Australia had long been committed to regulating the global weapons trade.

Dr Kelly said: “In terms of their humanitarian impact, these are weapons of mass destruction, with more than half a million people killed each year.”

United Nations Secretary-General Ban Ki-moon said that the ATT provided countries with the historic opportunity to stop the practice of weapons being sold on the black market and urged major arms dealing nations to sign the treaty in order to send a clear message to weapons traders.

Mr Ban said: “With the ATT, the world has decided to finally put an end to the ‘free-for-all’ nature of international weapons transfers. The ATT is substantive and robust, but its effectiveness will depend on the willingness of States to ensure its full implementation. The treaty will provide an effective deterrent against excessive and destabilizing arms flows, particularly in conflict-prone regions. It will make it harder for weapons to be diverted into the illicit market, to reach warlords, pirates, terrorists and criminals, or to be used to commit grave human rights abuses or violations of international humanitarian law.”

Australia was one of the first countries to vote in favour of the United Nations drafting a treaty to address the illicit sale of arms when the matter came to a vote in 2006. Australia’s United Nations Ambassador Peter Woolcott drafted the treaty alongside Argentina’s Roberto Garcia Moritan, and has been praised by US Secretary of State John Kerry for his efforts in seeing the resolution passed through the United Nations General Assembly.

The resolution was passed on 2 April, with 154 countries voting in favour of the proposed treaty. Only Syria, Iran and North Korea voted against the treaty, while major arms trading nations like Russia and China were among 23 countries that abstained from voting on the resolution.

Although the treaty has passed through the United Nations General Assembly, it must be ratified by the government of at least fifty countries before it comes into effect as international law. It will be tabled for consideration in Australian parliament, with the joint standing committee on treaties expected to recommend that the government ratify its terms.

The Australian government’s commitment to the issue of international arms trading does not end at the drafting of the treaty: the country has pledged $1 million to a fund that would help facilitate the implementation of the treaty’s conditions in developing countries around the world.