Australia promises not to spy on Indonesia

Foreign Minister Julie Bishop has given Indonesia assurances Australia will not spy on Jakarta anymore as she tries to repair the damage to bilateral ties. 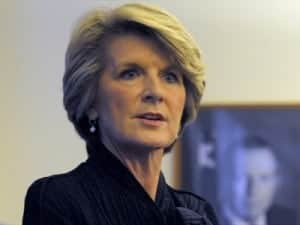 AUSTRALIA has agreed to a six-point plan aimed at repairing relations with Indonesia, with Foreign Minister Julie Bishop also providing assurances during talks in Jakarta that the Abbott government will not deploy intelligence assets against its northern neighbour.

A so-called “hotline” will also be established in the hope of avoiding future diplomatic rows, it was announced following high-level talks in Jakarta between Ms Bishop and Indonesian Foreign Minister Marty Natalegawa.

However, Dr Natalegawa also insisted that military and police co-operation, as well as sharing of intelligence, will not be restored until all six points in President Susilo Bambang Yudhoyono’s roadmap are addressed.

He also refused to nominate a time-frame for discussions around the code of conduct which Dr Yudhoyono demanded in the wake of revelations his phone, and those of his wife and inner circle, were monitored by Australian spies in 2009.

Dr Natalegawa said he had already reported to the president following the talks, adding that Dr Yudhoyono had been pleased with the progress made at the meeting.

A more detailed report would later be given to Dr Yudhoyono, who was in East Java on Thursday, after which it would be decided if the discussions could move to step two in the president’s roadmap – the drafting of the code of conduct.

“Essentially, the president expressed he was pleased that we were able to communicate today and he is pleased by the progress that has been made, and asked that further efforts be made (so) that we can address in full all the various bilateral issues that must be addressed,” Dr Natalegawa said.

He refused to reveal if a more detailed explanation was given in relation to the spying activities that have seen relations between Jakarta and Canberra sink to their lowest point since the East Timor crisis in 2009.

“Certainly, our communication today helped elucidate some issues that were not specifically mentioned in the letter from the prime minister,” Dr Natalegawa said.

Ms Bishop said after the talks, which came two weeks after the suspension in co-operation on November 26, both sides had expressed a commitment to restoring the relationship and building it to its fullest potential.

The foreign minister, for the first time, confirmed Australia had agreed to follow Dr Yudhoyono’s roadmap to normalising relations, while also promising that the Abbott government would never undertake espionage activities in the future that might damage Indonesia.

“We note the steps set out by President Yudhoyono that must be taken in order to normalise the relationship and, of course, we agree to adhere to those steps,” Ms Bishop said.

“Obviously we regret the events that lead to this situation. We regret the hurt caused to President Yudhoyono and to the Indonesian people.

“As Prime Minister (Tony) Abbott has said and I reiterate, the Abbott government will not undertake any act or use our assets and resources, including intelligence assets, in any way to harm Indonesia.”

It was Ms Bishop’s fourth trip to Indonesia since the Coalition won office three months ago but her first since details of the spying came to light.

Underlining the importance of the talks, Ms Bishop was accompanied by the former head of the Australian Security Intelligence Organisation (ASIO) and now Defence Department secretary Dennis Richardson.

Peter Varghese, the secretary for the Department of Foreign Affairs and Trade, and Andrew Shearer, who was the last foreign policy adviser in John Howard’s office and currently a senior adviser for national security to Mr Abbott, have also made the trip to Jakarta.

Ms Bishop revealed that Australia had also agreed to Indonesia’s suggestion that a hotline be established between herself and Dr Natalegawa, which would be aimed at avoiding or minimising diplomatic tensions in the future.

“We have agreed to establish a special communications channel, a hotline if you like, to ensure that we can resolve any issues in implementation, that we can avoid any unintended consequences,” Ms Bishop said.

Dr Yudhoyono has demanded Australia sign up to the “code of ethics and protocols”, insisting it is needed to map out the future bilateral relationship.

The president has insisted that the code of conduct must address the spying issue and contain protocols to ensure similar espionage activities do not occur again, and that it is signed by himself and Mr Abbott.

However, even if the code of conduct is implemented, there would be a period of evaluation, before Indonesia would agree to restoring co-operation in areas such as the military and police, including joint efforts aimed at combating people smuggling.

With the government borrowing heavily to fund its pandemic response and recovery, it has been suggested it could simply cancel...

There's big money on the line tonight, $3 million! Here are your Powerball results for Thursday, 22 October 2020

Times are most certainly tough and during there trying times you may find yourself needing a bit of help. However,...

Recovering from a viral infection is usually associated with the development of immunity. Whether infection with SARS-CoV-2 protects against reinfection...

When entering international markets, in particular, Australian companies are often faced with pressure to engage in acts of bribery.