The Australian government says its defence forces are ready to act against the Islamic State in Iraq and Syria if requested by the US but that conditions must be met. 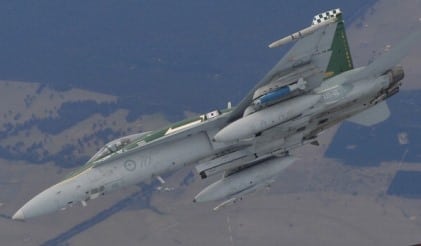 Australia is ready to join military action against the Islamic State organisation in Iraq as long as there are clear goals, says prime minister.

Speaking in parliament on Thursday, Tony Abbott outlined the preconditions for Australia to agree to join any escalation of US-led military operations in Iraq and possibly Syria.

The prime minister said that Australia had yet to receive an official request from the US to join operations beyond the recent humanitarian aid drops, but that if it did come there would need to be “an overall humanitarian objective” with clear and achievable goals.

Mr Abbott further signalled Australia’s willingness to take part in air strikes against the militant Islamic State (ISIS) organisation, saying, “no human being anywhere would wish to stand by and watch the preventable slaughter of innocent people”.

He went on to describe the self styled caliphate which has taken over parts of Iraq and Syria, “as near to pure evil as we are ever likely to see”.

The New York Times reported earlier in the week that US administration officials expected Britain and Australia would join the US in an expanded air campaign against ISIS.

On Friday, US President Barack Obama dispatched his Secretary of State John Kerry to the Middle East in an effort to mobilise a broad coalition of allies to back-up any expanded American military action against the Islamic State.

Australian Defence minister David Johnston said on Wednesday that although Australia has not yet been specifically approached for assistance by the US to assist in the Iraq crisis beyond the humanitarian aid drops, that the country’s forces were “at a high state of readiness” and that deploying the RAAF’s F18 Super Hornets would be an obvious choice.

Johnston added that Australian would continue to talk to the US about steps to preserve civilian life from the threat posed by the Islamic State (Isis).

Meanwhile, foreign minister Julie Bishop has said Australia, “stood ready to receive any further requests from the US” to “support efforts to disrupt and defeat [ISIS].”

“It will be based on an assessment of risk, what the achievable humanitarian purpose might be available and of course what clear and proportionate role there would be for Australia,” Bishop said in a media statement on Wednesday evening, ahead of Mr Abbott’s remarks to parliament on Thursday.

“We’re focused on ensuring that Isis can be defeated, that its barbaric ways can be stopped, and that the civilians they so brutally targeted are safe.”

The opposition Labor party has requested briefings on the latest developments while the Greens have come out in opposition to the plans, saying that military engagement in Iraq could “make the situation worse”.

Opposition leader Bill Shorten stated on Thursday that confronting the ISIS threat is beyond politics, indicating that Labor would give full support to whatever action the government ultimately takes.

“We will support the government on matters of national security because this is above politics,” Shorten said. “When it comes to making Australians safe, that is a first-order issue of any government, Liberal or Labor.”

Labor’s foreign affairs spokeswoman, Tanya Plibersek, called for calm but agreed that the international community had a responsibility to protect world citizens against genocide. However, she said that involvement in the 2003 US-led invasion of Iraq should give Australia pause for thought.

“The [Iraq] war in 2003 was not just damaging for Australia, for the United States, for all of the countries that were involved; I think it’s been very damaging for Iraq as well. We need to be very cautious and not do more harm than good,” she said in an interview with the ABC.

Johnston also said that both the US and Australia wanted to see a stable government in Baghdad and that would not happen until 10 September when the new prime minister, Haider al-Abadi, took office.

Johnston continued that both countries agreed that “a more inclusive government in Baghdad should be established before we start talking to them about what level of military assistance from the sort of group of allies who are concerned would start to materialise”.

“Secondly, we will need an invitation from the Iraqi government. We’ll need to settle rules of engagement. We’ll need to do a whole host of things before we start talking about any form of deployment. These things are not just done at the turn of a key, although they may seem as much. So there’s a long way to go before we start talking about deploying these sorts of systems into the field.”

Johnston said the ADF had started to develop its readiness after the emergence of “beheadings, mass executions, genocidal villages wiped out, ethnic cleansing”.

Johnston added that, “If this situation continues, I think it’s incumbent upon nations that have a strong, clear and understandable reputation and sense of right and wrong to do the right thing here and assist a stable Iraqi government if we can get one to defend itself and to retake and assert some reasonable level of legitimate control over these villages.”

Greens party leader Adam Bandt condemned the situation in Iraq, saying the actions of Isis were “terror and horror, pure and simple.”

Brandt reiterated a need for a parliamentary debate on the issue though, before Australia commits itself to the American retaliation plans.

“But we were told over a decade ago that sending combat forces to Iraq would stop this kind of terror and horror from happening and that plainly hasn’t worked,” said Bandt, speaking to media in Canberra.

“If history teaches us anything it’s that military involvement is not a cure-all.”

“In fact it has the potential to destabilise these regions even further and allow these kinds of horrors to flourish. The question is for those who think that Australian forces should go and join others in bombing another country, prove to us that it will make the situation over there safer, and that it will make Australia safer.”