Australia the most expensive place in the world… again

It's not always such a great feeling being top in the world. This Deutsche Bank PPP report just goes to show how expensive Australia is.

by Australian Times
in Move to Australia, News

For the fourth year in a row, Australia has ranked as the world’s most expensive country in Deutsche Bank’s ‘Mapping the World’s Prices’ report.

The fourth annual survey of global prices found that Australia tops the purchasing power parity (PPP) index, meaning that one USD  has the same purchasing power as $1.12 (AUD). New Zealand and the United Kingdom rated the second and third most expensive countries respectively.

Also see: Who has the most expensive groceries, Australia or the UK?

In recent years the United States has ranked as the cheapest developed country in the report. In 2015 however, the strength of the USD has narrowed the gap between Australia and the US. 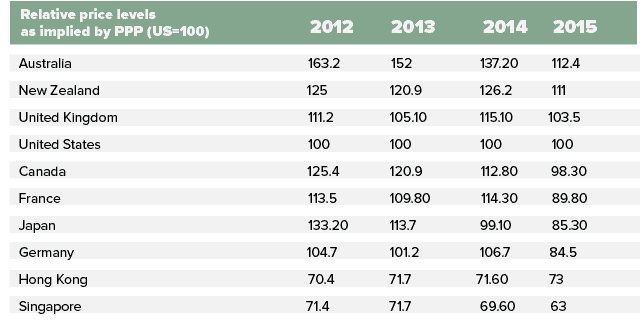 Similarly, smokers are coughing up the most in Sydney and Melbourne.

Sydney, Paris and London ranked as the most expensive places in the world for a weekend away, owing to exorbitant hotel room prices.

But not everything in Australia is the most expensive in the world.

Fortunately gym memberships are more reasonable. (And most reasonable in Melbourne).

Deutsche Bank compiles its lists using both internet prices and secondary sources. The report explains that its research measures prices but not affordability “in comparison to local purchasing power”. In other words, prices may generally be higher in Australia, but we should also then consider how much Aussies earn (see the ‘expensive groceries’ link near the top of this article for more).