Boat race protester Trenton Oldfield has won his battle to stay in the UK, which is just as well as he says his family couldn't live in "racist" Australia. 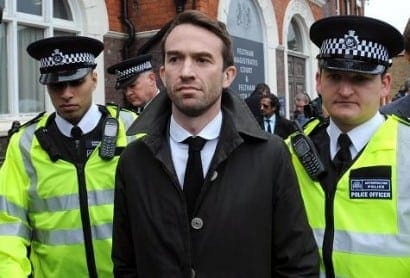 BOAT race protester Trenton Oldfield has secured a victory over the British government that wanted to deport him while simultaneously declaring his family could never live in “racist” Australia.

Mr Oldfield on Monday successfully appealed against Home Secretary Theresa May’s decision to kick him out of the country on the grounds that his presence was “not conducive to the public good”.

“There is no doubt in my view to your character and commitment and the value you are to UK society generally,” the judge said.

Mr Oldfield, originally from Sydney, has a British wife, Deepa Naik, 36, and a five-month-old baby daughter.

He’s lived in the UK for more than a decade.

The Australian, 37, swam into the path of the Oxford and Cambridge rowing crews as they raced down the Thames in April 2012 to protest against elitism.

He was subsequently jailed for seven weeks.

“Australia is a particularly racist country,” Mr Oldfield said on Monday when explaining that if deported he would be separated from his family.

Mr Oldfield said Ms Naik, who is of Indian descent, had never visited Australia and couldn’t live there because some Indians in the community had suffered violent attacks.

There was also everyday “passive water-cooler racism”, he said.

“Our home is here. Australia is on the other side of the world.”

Mr Oldfield said when he disrupted the boat race he’d recently returned from Canada after seven months caring for his father-in-law who was dying from cancer.

He was saddened to realise wealthier people could afford better drugs and have a better quality of life when gravely ill.

“I was vulnerable in terms of realising how short life can be,” Mr Oldfield said before breaking down in tears.

“I was very emotional. When you walk around London you see pockets of depravation that still exist. I think I was heartbroken.”

More than 250 staff and students from Oxford and Cambridge signed a letter of support ahead of Monday’s hearing.

Two professors gave evidence that Mr Oldfield’s work as an activist and independent publisher added to the debate about inequality.

A further 23 people wrote character references and were present at the tribunal.

The Australian’s lawyer, Stephanie Harrison QC, insisted the 2012 protest was an isolated incident.

“It won’t be repeated, he has learned his lesson,” she said.

But Home Office representative Darren Morley insisted Mr Oldfield broke the law by endangering himself and others, and it was appropriate for the government to reject his spousal visa.

“The whole country saw this … there’s a need to be firm against this type of behaviour,” he said.

Mr Oldfield’s solicitor Natalia Garcia said outside the tribunal it was extremely unusual for an immigration judge to allow an appeal on the spot.

It was proof of her client’s good character and contribution to the UK, she told reporters.

Judge Moore’s full determination will be delivered within 10 days.