600 Australian personnel to join US military action against Islamic State in Iraq but PM insists it’s not like 2003. 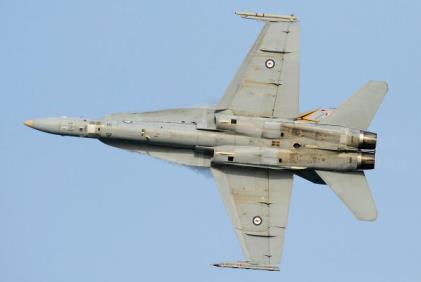 Following the announcement on Sunday that Australia would be committing forces to airstrikes against the Islamic State (ISIS) in Iraq and Syria, Tony Abbott has sought to further explain and justify the deployment.

The prime minister said on Monday that the aim of joining the US in military action was to dislodge ISIS, an organisation he has described as a “death cult”, and to “work with the Iraqis, to work with Kurds to ensure that they are able to keep their people safe”.

He also admitted that Australian citizens who have or do join ISIS may be killed by Australian forces, saying, “they know the risks, they took their chances.”

On the question of a time frame for Australia’s commitment, Mr Abbott said it could be “many, many months”.

On Sunday, Mr Abbott confirmed that a formal request to participate in the planned expansion of the military campaign against ISIS had been accepted from the US.

Australia’s commitment will include eight RAAF F/A18F Super Hornet fighter/bomber jets, a Wedgetail surveillance aircraft, plus one tanker and a transport aircraft.

Supporting the hardware will be 600 Australian Defence Force personnel, comprised of 400 from the air force and 200 from other forces, including special forces. It is understood the special forces will be for advice and training only, not for direct combat roles.

The Australian forces will be based initially in the United Arab Emirates, from where recent humanitarian aid drops over Iraq were conducted by Australia.

In his comments on Monday, Mr Abbott stated that Australian forces would not begin combat operations in Iraq until the formal written invitation had been received from that country’s government.

The prime minister said at this stage Australia was committed only to airstrikes in Iraq but did not rule out extending operations into Syria, where the US has explicitly stated its forces would be prepared to strike at ISIS.

While insisting that the current plans for Australian forces only related Iraq, Mr Abbot said Australia did not recognise the legitimacy of the Assad regime in Syria.

The prime minister also stressed that a full assessment of the risks and clarity about the rules of engagement would also be made before operations commence, suggesting that a final decision was likely following the UN Security Council meeting next week in New York, which he is due to attend.

Interviewed on the Seven Network on Monday, Mr Abbott said this was not like the 2003 invasion of Iraq.

While Labor has supported the Abbott government’s decision to offer Australian assistance in operations against ISIS, Greens leader, Christine Milne, said it will serve as “a rallying cry for young jihadis”. Milne said Australia’s involvement would elevate the risk of terrorist attacks at home rather than reduce the risk and described it as “an open-ended commitment of young Australian lives to a United States war in Iraq”.

On Friday last week, Australia’s terrorism alert level was raised from medium to high – meaning that a terrorist attack in Australia is ‘likely’ – for the first time in 11 years.