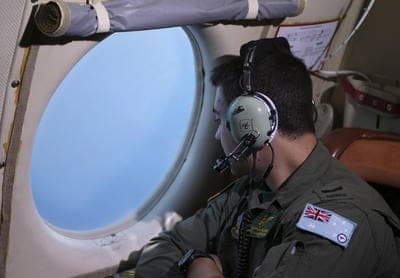 A wooden cargo pallet, belts and possibly straps have been observed in the remote Indian Ocean by aircraft deployed in the hunt for a missing Malaysian jet.

Australia’s Acting Prime Minister Warren Truss says authorities are hopeful of a breakthrough in the search for the missing Malaysia Airlines flight MH370, after an Australian aircraft spotted the small pieces of debris.

Visiting the Australian Maritime Safety Authority’s Canberra headquarters on Sunday, Mr Truss said the Indian Ocean search will continue “as long as there is hope”.

“We hope that soon there will be more information available that might help to provide some kind of closure, or at least an understanding of what’s happened, especially to the families of those who were on board Malaysia Airlines flight 370,” he said.

Mr Truss’s comments echoed those of Prime Minister Tony Abbott, who earlier said an Australian civilian aircraft had on Saturday spotted debris in the southern Indian Ocean, including a wooden pallet.

It was still too early to say whether the debris was from an aircraft, Mr Abbott said in his latest update on the search.

“But obviously we have now had a number of very credible leads,” he told reporters in Papua New Guinea, also referring to new Chinese satellite imagery suggesting at least one large object.

“There is increasing hope, no more than hope … that we might be on the road to discovering what did happen to this ill-fated aircraft.”

The Australian Maritime Safety Authority (AMSA) said several small objects were identified by a civil aircraft in Saturday’s search and further searches would continue on Sunday to determine if the objects were related to the missing plane.

Four civil jets and four military aircraft were involved in Sunday’s operation, which AMSA says would be a visual search based on the satellite imagery.

“We’ve gone back to that area today to try and refind it,” he told reporters in Canberra.

“It’s a possible lead. But we will need to be very certain that this is a pallet because pallets are used in the shipping industry as well.”

Two weeks later Malaysian investigators still believe the aircraft was “deliberately diverted” by someone on board.

Head of the AMSA’s rescue coordination centre John Young said the authority still held the “gravest of concerns” for those on board MH370.

“We intend to stick with this until we’ve done all we can,” he told reporters in Canberra.

RAAF flight lieutenant Russell Adams told reporters after a 10.6 hour flight to the zone, although they did not find anything of interest on Sunday due to poor weather, he was proud of the team’s efforts.

“There was cloud down to the surface and at times we were completely enclosed by cloud,” he said.

Lt Adams said it had been a long day for the crew but they were still in high spirits.

“This us what we train for, this is what we enjoy doing in that we get to utilise the capabilities of the aircraft and work together as a team as part of the multinational effort which is going on,” he said.

Lt Adams said the crews still had drive and would continue their efforts for as long as it took.

“We might do 10 sorties and find nothing, but on that 11th flight when you find something and you know that you’re actually contributing to some answers for somebody or if you’re finding a life raft out in the Solomon Islands with people alive on it, it really makes it worthwhile,” he said.

IMAGE: Sargent Matthew Falanga on board a Royal Australian Air Force AP-3C Orion, scans for debris or wreckage of missing Malaysian Airlines flight MH370 in Southern Indian Ocean, Australia, Saturday, March 22, 2014. The Orion under took a four hour journey to the search an area approximately 2500km south west of Perth, two hours on station searching at about 400 foot above the ocean with then a four hour return.(AAP Image/ AP Pool, Rob Griffith)