The Australian government has contributed $700,000 to refurbishing the Franco Australian Museum in Villers-Bretonneux. The museum honours the contribution of Aussie diggers on the Western Front during World War One. 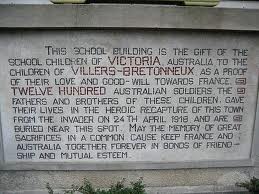 THE AUSTRALIAN government has contributed $700,000 to refurbishing the Franco Australian Museum in Villers-Bretonneux, which honours the contributions of Aussie soldiers during the bloody battles of the Western Front in World War One.

The museum is testament to the enduring links between Villers—Bretonneux and Australia, which began during the Battles of Villers-Bretonneux in April 1918 when Australian troops defended the town during the German spring offensive.

“Australian forces gained wide recognition for their heroic efforts and were welcomed into the hearts and minds of the people of Villers-Bretonneux,” he said in a statement.

“The Franco Australian Museum pays tribute to Australian service and the museum expansion will provide greater flexibility in the use of space for both the museum’s collection as well as improve access and amenities for the more than 10,000 people, many of them Australians, that visit each year.”

Villers-Bretonneux hosts annual memorial events for Anzac Day to commemorate the re-taking of the town by Australian troops in 1918. It attracts a number of Australian and French visitors who travel to the town to acknowledge the service of Australian soldiers.

The school housing the museum was a gift from the children of Victoria following the war. Built in the 1920s, a sign in the playground reads “Do not forget Australia.”

Australia’s Ambassador to France, Mr Ric Wells, presented the â‚¬500,000   contribution to the Mayor of Villers-Bretonneux, Dr Patrick Simon, at the Victoria School today. Further funding will be provided in 2014.

The refurbishment will be completed in time for centenary commemorations on the Western Front.

It forms part of the Australian Remembrance Trail along the Western Front — a $10 million government initiative with French and Belgium authorities — to highlight sites along the Front where Australian soldiers served during World War 1.