Australia completes its first humanitarian drop to Yazidis in Iraq

Australian air force joins international mission to deliver food and water to people fleeing Islamic State militants in Iraq. “We in Australia try to do what we can to help,” PM tells service personnel. 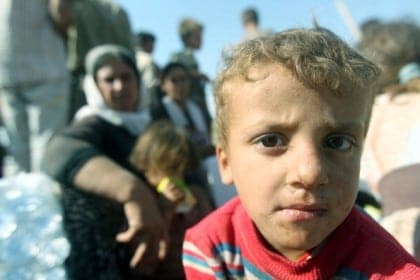 Australian defence minister, David Johnston, confirmed on Thursday that Australia had made its first drop of humanitarian aid to people stranded by fighting in Iraq.

Speaking to reporters, he said: “We have carried out the first of our tasks as we promised we would, and as we were requested. To the best of my knowledge, that has gone seamlessly.”

An RAAF C-130 Hercules aircraft is understood to have air-dropped 10 pallets of water and packets of energy biscuits.

The mission was the first of what is understood will be many as part of the international effort to relieve stranded Yazidi Kurds who are fleeing the radical jihadist forces of the self-proclaimed Islamic State (formerly ISIS or ISIL) which has taken over large swathes of north-western Iraq and parts of Syria.

Prime Minister Tony Abbott, returning from London, stopped at al-Minhad airbase near Dubai in the UAE to see preparations for the mission.

“The aid drops will continue until the security of the Yazidi civilians is assured and they can safely move from Mount Sinjar,” Mr Abbot said in a prepared statement.

In remarks delivered to the Australian forces taking part in the mission, he said: “You are putting forward the long, strong arm of Australia to help and protect those people who are at the mercy of the elements, who are at the mercy of the murderous hoards of the Islamic State movement, and I want to say that your professionalism, your commitment and your courage is wholly admirable.”

While in London earlier this week, the prime minister met with senior UK government officials and ministers to discuss the situation in Iraq, among other things.

On Tuesday he said that at this stage Australia would only be involved in a humanitarian mission to ensure the Yazidi refugees were not “exposed to the murderous zealotry of the Islamic State”.

When asked further about the motives behind renewed Australian military involvement in Iraq, Mr Abbott insisted there should be no comparing the present situation with the 2003 invasion of the country by western forces, including Australia.

David Johnston meanwhile would not rule out Australian forces taking part in any effort to evacuate the refugees, but insisted that the focus for now is on the aid effort.

“Look, we are not getting into any of those operational matters,” he said on Thursday, adding, “I don’t believe that there is any requirement for us to do that.”

“What we are focused on and what I have said we are participating in is in the airdrops from a humanitarian perspective only,” he said.