Aussie veterans honoured on Battle of the Atlantic 70th anniversary

The Australian High Commissioner to the UK, Mike Rann, laid a wreath yesterday in London to commemorate the 70th anniversary of the Battle of the Atlantic. Mr Rann told attendees the Allied forces would have lost World War II had they had not achieved victory in the six year-long naval confrontation. 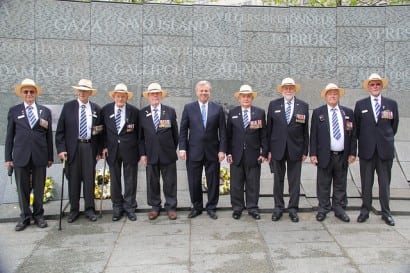 THE Australian High Commissioner to the UK, Mike Rann, laid a wreath yesterday in London to commemorate the 70th anniversary of the Battle of the Atlantic. Mr Rann told attendees the Allied forces would have lost World War II had they had not achieved victory in the six year-long naval confrontation.

Eight Australian veterans that had participated in the Battle of the Atlantic were present at the wreath-laying ceremony at the Australian War Memorial in Hyde Park. Mr Rann said it was a privilege to share the occasion with men that had “helped change the path of the war and gave the next generations the freedoms and opportunities we enjoy today.”

Mr Rann said: “Without the Allies winning of the Battle of the Atlantic there could have been no D-Day, there could have been no VE Day.  Without your valiant efforts we would have lost the war.  Not only freedom but civilisation would have perished. As Winston Churchill said: ‘The Battle of the Atlantic was the dominating factor all through the war.  Never for one moment could we forget that everything happening elsewhere depended ultimately on its outcome.’”

Warren Snowdon, the federal Minister for Veterans Affairs, said that the Battle of the Atlantic was a pivotal moment in the Allied war effort against Nazi Germany. The veterans involved in yesterday’s ceremony, aged between 86 and 95, also participated in a service at Liverpool’s Anglican Cathedral followed by a march through the city.

Mr Snowdon said: “In addition the veterans will also attend Australian-led services commemorating RAN, RAAF and Merchant Navy service, including wreath-laying ceremonies at the RAF Coastal Command plaque in Westminster Abbey, the Merchant Navy Memorial at Tower Hill and on-base at Her Majesty’s Naval Base Portsmouth. This visit will be one of high emotion for this group of men. They will get the chance to meet with old mates and gather with Allied friends to remember the thousands who never made it home.”

Although the Battle of the Atlantic lasted for the duration of World War II, yesterday’s ceremony commemorated the climax of the conflict in which Allied forces managed to sink nearly 100 German U-boats and seriously damage Germany’s ability to restrict Allied movement in the Atlantic Ocean. The efforts of troops in the Battle of the Atlantic resulted in over one million tonnes of imported material getting through German lines to provide support to Allied forces based in the United Kingdom.