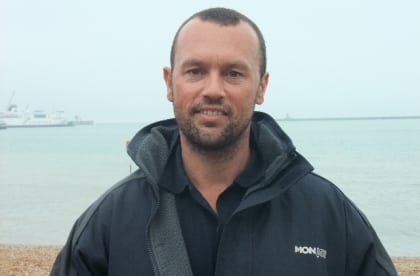 Beachgoers left the British border control red-faced when they thought they were witnessing an illegal immigrant trying to swim across the English Channel.

When witnesses at Shakespeare Beach in Dover saw a man making his way across the English Channel they called Britain’s border control officials to deal with a suspected illegal immigrant. But when officials arrived on the scene they quickly realized that the man swimming across the channel was not a desperate (yet absurdly fit and brave) illegal immigrant but an Australian tri-athlete completing the second leg of the Arch to Arc ultra-triathlon.

41-year-old John Van Wisse had just embarked on the second leg of this gruelling 483km challenge after he had already run the 140kms from London to Dover. The 34km swim across the Channel was set to be followed by a 290km cycling leg to Paris.

British border control approached the Australian athlete but then realized that he was not an illegal person so desperate to reach Britain that he would venture into the Channel’s freezing dark waters, he was actually trying to set a new world record time for the challenge.

The ‘Arch to Arc’ triathlon challenge, starts at London’s Marble Arch and the finish line is at the the Arc de Triomphe in Paris.

Despite Van Wisse’s delays he managed to finish the challenge in a new record time of 61 hours and 27 minutes cutting the last record by 12 hours and 12 minutes. Englishman Mark Bayliss set the last record in 2012.