Western Australian shock jock Howard Sattler has been suspended from the airwaves after asking PM Julia Gillard if her partner is gay during an interview. 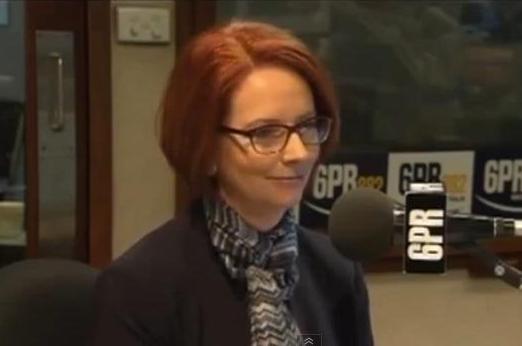 PERTH shock jock Howard Sattler has been suspended from the airwaves after a cringe-worthy interview with the prime minister in which he asked if her partner Tim Mathieson was gay.

Sattler is well known for his blunt style, but his interview in Perth with Julia Gillard on Thursday afternoon stoked a flurry of tweets from local journalists, who deemed his line of questioning a step too far.

The Fairfax stalwart, whose ratings have dipped lately, said he had asked Ms Gillard’s office for a “candid” interview.

But shortly after the wide-ranging dialogue, Perth journos took to Twitter, describing it as a bizarre exchange.

Sattler asked Ms Gillard to test some “myths, rumours, snide jokes and innuendos”, following up with “Tim’s gay. That’s not me saying it, that’s a myth”.

“Yeah, but you hear it, he must be gay, he’s a hairdresser,” Sattler said.

Ms Gillard replied: “To all the hairdressers out there, including the men who are listening, I don’t think in life one can actually look at a whole profession full of different human beings and say, ‘gee we know something about every one of those human beings’. I mean it’s absurd, isn’t it?”

“You can confirm that he’s not?” he asked.

“Oh, Howard, don’t be ridiculous, of course not,” the prime minister shot back.

Howard: “You’re a heterosexual relationship, that’s all that I’m asking.”

Gillard: “Howard, you and I have just talked about that. So now Howard, that is bordering on …

Gillard: “Howard, let me just bring you back to earth. You and I have just talked about me and Tim living at the lodge. We live there together as a couple, you know that.”

Sattler also asked about “menu-gate”, claiming the PM was “hung up” on the issue.

Ms Gillard said she was “more than happy” to move on and talk about something else.

She was also asked whether she should apologise over the matter, given Liberal candidate Mal Brough had claimed he knew nothing of the offending document. The answer was no.

Sattler later apologised to those who thought he had gone too far.

“The management of this station … has instructed me to apologise to anyone who was offended by my interview with the prime minister, during which I asked questions about her private life,” he said.

“They agreed to a candid interview.

“Now, if you think I went too far, you’re entitled to have that view. I apologise.

“The management want me to do that and I have just done that.”

“Fairfax Radio Network management has reviewed the interview and considers that the questions posed by Mr Sattler were disrespectful and irrelevant to the political debate.

“The management of Fairfax Radio Network also extends its sincere apologies to the prime minister and Mr Mathieson.

“Mr Sattler has been suspended from broadcasting on 6PR pending an internal inquiry.” – AAP