Aussie injured in Running of the Bulls named

The 23-year-old Australian woman gored at Pamplona's Running of the Bulls festival over the weekend has been named as New South Wales resident Jessica Escarlet. 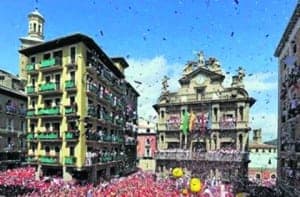 THE 23-year-old Australian woman that was severely injured at the Running of the Bulls in Pamplona over the weekend has been named by Spanish media as New South Wales resident Jessica Escarlet.

Ms Escarlet underwent surgery at the Navarra Hospital in Pamplona after being gored in the back by a bull on the final day of the annual San Fermin festival. She was injured as she tried to climb over a fence, with the bull’s horn damaging her right lung and leaving her in a “very grave” condition.

Emergency director of Navarra Hospital, Dr Javier Sesma, said that media reports that Ms Escarlet’s lung had been pierced were false and that doctors were “hopeful” that she would recover. After surgery Ms Escarlet was moved to a recovery unit where she has been listed as in a “very serious” condition.

Ms Escarlet was gored by a Miura bull outside the bullring entrance in Pamplona. Miura bulls are renowned as the largest and fastest of Spain’s fighting bulls, with the Miura bulls involved in Sunday’s run covering around 850 metres in two minutes and sixteen seconds.

Women traditionally do not participate as runners in the San Fermin festival, which attracts around one million people to the Spanish city of Pamplona each year. The festival was first documented in the 14th Century, however the practice of bullfighting in honouring Saint Fermin in Pamplona dates back several centuries earlier.