Two Australian soldiers will take part in a charity expedition across the Antarctic to the South Pole with Prince Harry later this year to raise money for wounded soldiers. 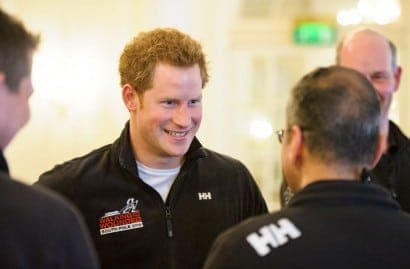 TWO AUSTRALIAN soldiers will take part in a charity expedition across the Antarctic to the South Pole with Prince Harry later this year to raise money for wounded soldiers.

Private Heath Jamieson and Corporal Seamus Donaghue, who have overcome injuries sustained in Afghanistan, have been chosen to join Team Commonwealth on the South Pole Allied Challenge. With fellow soldiers from Canada they will compete against teams from the USA and the United Kingdom to reach the South Pole unassisted.

Walking with the Wounded charity patron Prince Harry announced the teams in London on Friday, before taking up an invitation from expedition leader Inge Solheim to join the UK team on the trek in December.

Prince Harry paid tribute to Servicemen and women and said the charity allowed wounded soldiers to “meet challenge head-on and overcome it and inspire others to do the same.”

The trek is a partnership with Australian charity Solider On, and money raised will go towards providing rehabilitation services to wounded soldiers.

Private Heath Jamieson, who was shot in the neck in 2011 in Afghanistan, underwent rehabilitation to learn to walk again.

Corporal Seamus Donaghue was shot in the leg, and has told AAP the upcoming challenge will require mental and physical strength.

“It’s important that you push yourself beyond your injury,” he said.

“Going on these treks will hopefully inspire others who are in rehabilitation and tell them that amazing things are still possible.”

During the challenge teams will race across Antarctica in temperatures of minus 45 degrees Celsius and battle 90km/h winds.

Cold weather training in Iceland has helped prepare the Aussie diggers for the conditions they may face in the Antarctic.

“ Working towards something like this lets you be part of a team again, get your mind back on what’s important and gives you the motivation to keep going and get better as best you can,” Pte Jamieson told Australian Times at the time.

Prince Harry welcomed the teams from the Commonwealth and the US and said he was looking forward to seeing them at the finish line.

“As a member of the British team, I will have a brew on ready for you when you join us at the Pole.”