The head of global energy giant Shell says rising costs are a challenge for doing business in Australia. 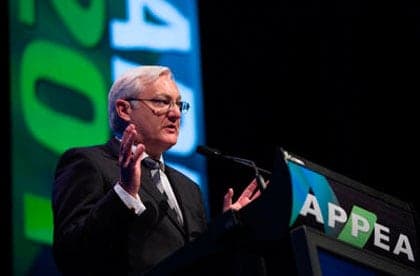 THE head of global energy giant Shell says rising costs are a challenge for doing business in Australia.

West Australian MPs on both sides of politics fear the proposed offshore Prelude project will hit royalties, as it falls mainly outside state waters.

“As you know, rising costs have become a significant challenge for companies doing business here,” he told the Australian Petroleum Production and Exploration Association conference in Brisbane on Monday.

He said Australia’s gas producers were operating in a highly competitive international market.

“In addition, this country is facing rising competition from other gas producers in North America, Asia and East Africa,” he said.

Yes government debt is cheap, but that doesn’t mean it comes risk-free

Mr Voser said the federal government needed to prioritise boosting the number of graduates with the skills to “take on big energy projects”, and lower taxes to drive innovation and investment.

“This is particularly true in Australia, where our industry is dealing with a shortage of employees with specialised technical skills.”

He said Shell was proposing the world’s largest floating facility 200 kilometres off the Kimberley coast, which would create 350 direct jobs over 25 years.

“This massive display of technological know-how will eliminate the need to devote land and pipelines to process LNG onshore,” he said.

“It also holds the promise to unlock additional significant reserves of already discovered gas that otherwise would not be tapped.”

Global gross public debt was already high before the crisis, at about 80% of one year’s world GDP. It has...

Along with social distancing measures and effective vaccines, a healthy immune system is our best defense against coronavirus infection. To...

Perth caterer was a wedding no-show and failed to refund the money paid. He also botched a 40th birthday celebration....

This week’s announcement of mandatory disclosures of climate-related risks for companies and financial institutions is arguably the New Zealand government’s...