Australian music and sports fans have complained to a parliamentary inquiry about ticket scalping (touting), but the entertainment and ticketing industry says it isn't a major problem. 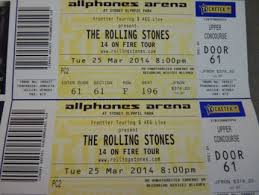 Australian sports fans and music lovers have vented their frustration about not being able to buy tickets to major events because scalpers resell tickets for vastly inflated prices.

But the entertainment and ticketing industry says consumer protection laws are adequate and scalping isn’t a major problem.

A parliamentary inquiry into ticket scalping has received 10 submissions, six of which are from consumers complaining Bruce Springsteen and Rolling Stones concerts and major sporting events were targets for scalpers.

Keith Sawers missed out on tickets to a Rolling Stones concert and later found many for sale at inflated prices elsewhere.

“How can someone in Canada buy eight tickets to a Sydney show when a resident of NSW cannot get them?” he asks.

However, Hawthorn fan George Peterson was in favour of ticket scalping if events sold out too fast.

“What sort of country is this if you guys, who are smarter than me, and we vote you in to look after us, bring in laws to stop me going to see my team play in a grand final?” he writes.

Live Performance Australia – representing promoters, venues and festivals – says ticket scalping has a minimal impact because only a few events each year are likely to be targeted by large scalping operations.

It says it’s important people be allowed to sell tickets if they can’t attend an event.

“We believe the current available evidence shows that anti-scalping legislation is unwarranted, ineffective and unenforceable,” its submission says.

In Queensland, you can be fined up to $2200 for reselling or $550 for buying tickets for events at major sports facilities for more than 10 per cent than face value.

Victoria has laws allowing the government to “declare” sporting events for which unauthorised ticket sellers face fines up to $8660.

NSW is considering legislation requiring resale ads to include a photo showing the ticket number, row and seat number.

Ticketmaster intends to launch an Australian resale marketplace in the next few months, saying fans want access to legitimate on-selling.

eBay, fingered by consumers as a main outlet for scalpers, says any regulation of ticket resales will just help the primary marketers further control ticket prices and supply.

It says this won’t necessarily be in the interests of consumers.

The online auction site points to “problematic” practices of ticketing companies including underpricing to ensure events sell out and dumping all available tickets on sale at the same time, causing websites and phone lines to crash.