Trenton Oldfield, the Australian activist who was jailed for disrupting the 2012 Oxford v Cambridge Boat Race, has been ordered to leave the country after his application for a spousal visa was refused. 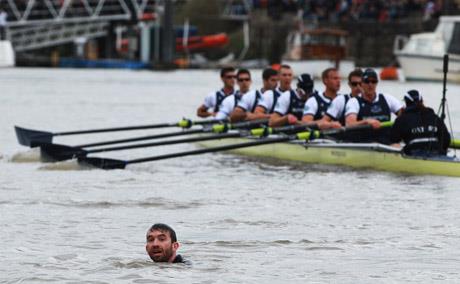 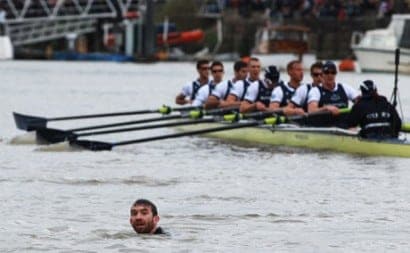 TRENTON Oldfield, the Australian activist who was jailed for disrupting the 2012 Oxford v Cambridge Boat Race, has been ordered to leave the country.

The 37-year old, whose British wife is expecting their first child this week, has been told by the Home Office his presence would not be “conducive to the public good”.

Mr Oldfield has lived in the UK for ten years. His application for a spousal visa to stay with his wife Deepa Naik, and their expected child, has been refused.

Mr Oldfied has expressed shock at the decision of the Home Office.

“No one was expecting this. I have a tier one visa, as a highly skilled migrant, and I was sentenced to less than a year.

“The lawyer said I had nothing to worry about because it was less than a year. It feels to me that this is a very vindictive decision, very political and very much an overreaction.”

Mr Oldfield purposefully swam in the path of the 2012 Oxford-Cambridge Boat Race in a protest against ‘elitism’.

He was arrested and charged with a public order offence and received a six month custodial sentence. He was released with an electronic tag after seven weeks. He had no previous convictions

Sentencing Mr Oldfield in October last year Judge Anne Molyneux said he had ruined the race for everyone.

“You caused delay and disruption to it and to the members of the public who had gone to watch it and to enjoy the spectacle of top athletes competing,” she said.

“The rowers had trained for many months. You had no regard for the sacrifices they had made or for their rigorous training when you swam into their paths.”

Mr Oldfield stressed at the time his protest was peaceful and non-violent.

“Before bringing their verdict, the jury asked the judge if she could be lenient. The probation officer recommended a non-custodial sentence.

“The sentence was excessive, but the judge also said I have contributed positively to life in this country.”

He told The Guardian he did not want to return to Australia. His wife Deepa had never been there and had relatives in the UK.

“We clearly have a life together here,” he said.

“We work together, we publish books, we run two not-for-profit organisations. Every part of our lives is entangled together here. We are about to have a family.”

Mr Oldfield has appealed against the visa refusal as disproportionate and says it breaches article 8 of the European convention on human rights, guaranteeing the right to a family life.

A Home Office spokesman said: “Those who come to the UK must abide by our laws.”