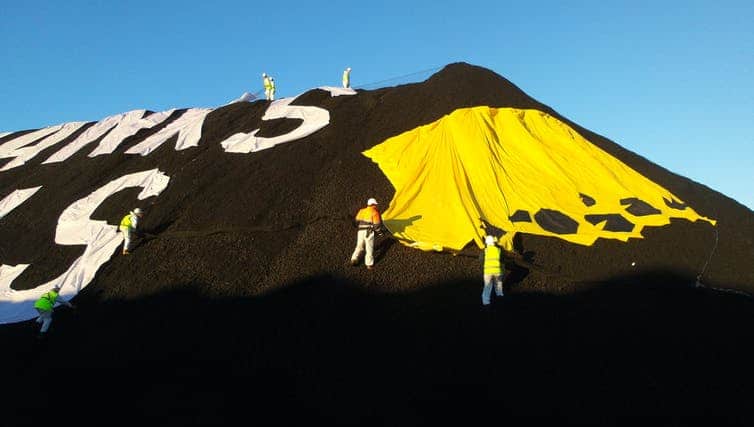 Greenpeace members protesting at Newcastle port in 2017, calling on the Commonwealth Bank to stop investing in coal. (Jaz Kaelin/The Conversation)

The government has the activist group Market Forces squarely in its sights as it considers ways to stop environmental organisations persuading financial and other businesses to boycott companies in the mining sector.

It is also targeting funders of class actions, in its proposed crackdown on those running climate change campaigns that hit firms.

“Environmental groups are targeting businesses and firms who provide goods or services to firms they don’t like, especially in the resources sector,” Morrison told the Queensland Resources Council.

Also see: Greta Thunberg: What might Lily and Abbey Morrison say to their dad, the prime minister, about the Climate Change activist?

Market Forces was launched in 2013, and is affiliated with Friends of the Earth. The organisation’s website says it “exposes” institutions, such as banks, superannuation funds and governments that are financing environmentally destructive projects.

Market Forces has lobbied heavily against Adani’s proposed Carmichael mine in central Queensland. Its website lists the companies it says have links to the project, and asks supporters to contact those companies to demand they cut ties.

The organisation’s chief executive Julien Vincent hit back at the government on Monday, saying that where it saw something it did not like “its response is to get it shut down”.

“We simply allow people to make informed decisions on who they do business with,” Vincent said.

“That’s a right that we thought, until recently, that this government was prepared to uphold”.

But Porter said it was “simply not OK” for any Australian business to be targeted by groups seeking to do it financial harm “when all they are doing is working in an industry like mining and resources that a small number of domestic and international activists have an ideological objection to.

“There are a growing number of examples where we have seen radical activist groups like Market Forces that try and impose their political will on companies across the country through widespread, co-ordinated harassment and threats of boycotts,” he said.

The government was looking at multiple options, across portfolios, Porter said, and the work would be prepared urgently.

The government was also considering regulatory action against “the growing presence of litigation funders who are receiving disproportionately large shares of payments in class action litigation which is becoming increasingly politicised by a focus on companies that operate in the mining and resources sector”.

Casting the net even wider, Porter said the government would consider other areas of activists’ “lawfare” which was “designed to delay, frustrate and cause unnecessary expense to mining and other legitimate commercial projects and businesses”.

Secondary boycotts are already outlawed under the competition and consumer legislation but there is an exemption where the dominant reason is for environmental or consumer protection.

Labor has accused Morrison of “virtue signalling” in his planned attack on activist groups.