Assange to remain at London embassy until US WikiLeaks investigation ends

Swedish authorities have agreed to question WikiLeaks founder Julian Assange at the Ecuadorean Embassy in London, where the 43-year-old Australian has been holed up for nearly three years. 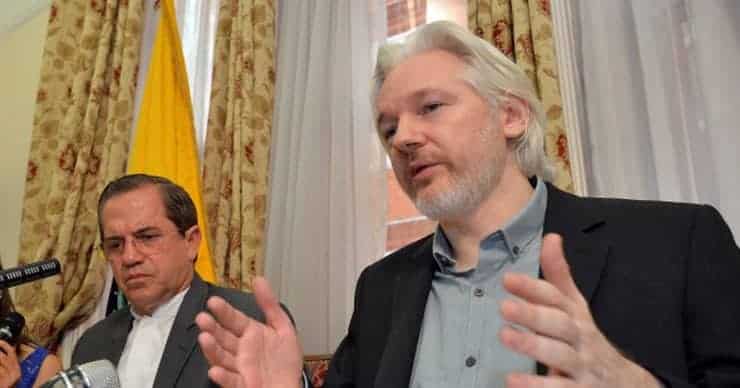 There has been speculation that Australian whistleblower and founder of WikiLeaks, Julian Assange may leave the Ecuadorean Embassy after Swedish authorities agreed to question him in London over allegations of sexual misconduct.

The sex allegations were lodged by two female WikiLeaks supporters who hosted him during a visit to Sweden.

Assange has taken refuge at the embassy for almost three years while US authorities pursue a “multi-subject investigation” of WikiLeaks. Previously, prosecutors refused to consider questioning Assange inside the Ecuadorean embassy.

Britain’s Foreign Office reportedly said that they stand “ready to assist the Swedish prosecutor as required”.

Similarly, Ecuador’s Foreign Minister Ricardo Patino reportedly said that they have offered to let prosecutors question him from day one.

The 43-year-old Australian refused to be questioned in Sweden, arguing that he risked being extradited to the US.

A US lawyer representing Assange and WikiLeaks, Michael Ratner, told Reuters that if Assange leaves the embassy, he would likely be arrested by British authorities and sent to America to face possible trial.

“Even were the Swedish case to be disposed of, the UK would arrest Assange upon leaving the embassy for claimed violations of bail conditions or something similar,” he reportedly said.

Prosecutor Marianne Ny agreed for Assange to be questioned in the embassy, as by August the statute of limitations on some of the alleged crimes would become effective.

“My view has always been that to perform an interview with him … in London would lower the quality of the interview and he would need to be present in Sweden in any case should there be a trial,” Ny said in a statement.

“Now that time is of the essence I have viewed it therefore necessary to accept such deficiencies to the investigation.”

According to Reuters, Joshua Stueve, a spokesman for the U.S. Attorney’s office in Alexandria, Virginia, said the investigation into WikiLeaks remains open. Other U.S. law enforcement sources said that no criminal charges have been filed against Assange yet.

IMAGE: WikiLeaks founder Julian Assange (R) sits next to Ecuadorian Foreign Minister Ricardo Patino during a press conference, where he confirmed he ‘will be leaving the embassy soon’, in the Ecuadorian Embassy on August 18, 2014 in London, England. Mr Assange has been living in the embassy since June 2012 in an attempt to avoid extradition to Sweden where he faces allegations of sexual assault. Photo by John Stillwell – WPA Pool/Getty Images