ANZAC DAY | A crowd of 4500 gathered at Villers-Bretonneux in northern France to pay respects to fallen Australian soldiers. 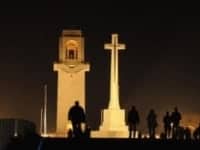 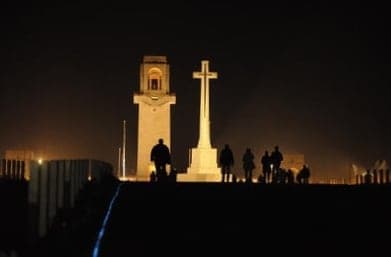 The brave efforts of diggers on the Western Front in World War I helped shape modern Australia, Foreign Minister Julie Bishop has told an Anzac Day service in northern France.

A crowd of 4500 gathered on Friday for the annual dawn service at the Australian National Memorial on the outskirts of Villers-Bretonneux, in the heart of the Somme valley.

Young and old, from near and far, Australian and New Zealand pilgrims – along with French locals – came together on a cold, clear morning for the service, which has grown in popularity since it was first held in 2008.

As dawn broke, Ms Bishop paid tribute to the men who pulled off what is considered one of great Australian victories in the First World War.

“No longer the fresh, perhaps naive, boys of the Anzac landing (at Gallipoli) three years before – the Australian Imperial Force of 1918 was battle-hardened, canny and fiercely brave,” Ms Bishop said in the address.

While not as famous as the Gallipoli campaign, the battle of Villers-Bretonneux marked a key turning point in the war because the Australians were able to stop the German forces advancing towards Paris.

But their success came at a heavy cost. More than 1,500 were killed or wounded in the battle, which began on the night of April 24, 1918, and ended on Anzac Day.

“The loss of more than 60,000 Australian lives in World War I from a total Australian population of fewer than five million at that time meant few, if any, Australians were left untouched by the scourge of war,” Ms Bishop said.

“Yet the war was no less than the crucible that forged modern Australia.”

Some at Friday’s service wore green and gold clothing; others were clad in Australian flags.

Many have travelled from bases in Europe or the UK but there are also plenty who made the trip from Australia, including Katrina and Stuart Moane, 66 and 70, from Newcastle.

They have visited the Somme battlefields many times but attended their first dawn service to honour “history, national pride and relatives”.

Jessica Farlow, 23, Jess Rainsford, 19, and Tom Mills, 24, are Australians based in London and wanted to carry on the Anzac Day tradition away from home.

“It’s sort of like a rite of passage for people of our generation,” Ms Farlow said.

About 295,000 Australians served in France and Belgium during World War I and 46,000 never made it home.

Many have never been found – 10,764 names are etched on the monument’s stone walls honouring the lost.

Angie and Stephen Connelly, from Lennox Head in NSW, went to the service because Angie’s great uncle, Hubert O’Neill, is one of those listed.

“There was a fair investment here (the Western Front) in terms of lives it’s great that so many people are coming back here to have a look and remember,” Mr Connelly said.