Anzac story belongs to all, says Bob Carr in France

ANZAC DAY | "All of us linked across the world by the same duty to honour and remember, and by the same sense of the loss and waste of war."

by Katina Curtis
in News 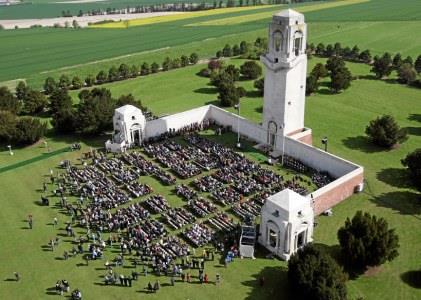 AUSTRALIA’S history, including the Anzac legend, belongs to all who live in it whether they are born there or immigrate, Foreign Minister Bob Carr has told a commemorative service in France.

Senator Carr said the Anzac Day dawn service he attended in Villers-Bretonneux was part of a worldwide commemoration like no other.

“All of us linked across the world by the same duty to honour and remember, and by the same sense of the loss and waste of war,” he said.

The answer to why so many were drawn to such services could be found in the men who gave their lives – a cross-section of the Australian people.

Senator Carr said a fifth of those who served in the First World War had been immigrants to Australia, including the great general Sir John Monash.

“This serves to remind us that we were then and remain today a nation of immigrants,” he said.

“That the more recent arrivals are part of our living history and that all the history of modern Australia, including the story of Anzac, belongs to them equally wherever they were born.”

French veterans affairs minister Kader Arif said it was unthinkable today that any nation would send one-tenth of its population overseas to fight on behalf of another country.

“You have fought in France as though this country was your own,” he told the service.

“Today we welcome you here as our brothers.”

The wartime link between Australia and France was also commemorated in Canberra, with about 150 people attending a service at the French embassy.

French ambassador Stephane Romatet spoke of several veterans of the Somme and their families whom he had met.

He also remembered the 39 Australian soldiers killed in Afghanistan and the French who died in service in Mali earlier this year.

Defence force chief General David Hurley cast aside his prepared speech to recall instead his wife’s great uncle, who fought at Gallipoli and Villers-Bretonneux.

“Personal memories are very important because that’s what binds our two countries,” he told the gathering at the French embassy’s war memorial.

“This memorial is more than bricks; it’s a symbol of a great link.”