Anzac Day in London: Thousands turn out at dawn service

Aussie and Kiwi expats came together to pay their respects at a dawn service in Hyde Park on a mild London morning. 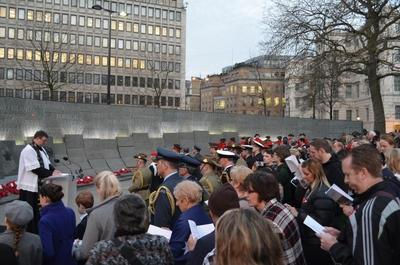 THE Anzac Day tradition remains strong among Australians and New Zealanders in London.

About 3000 expats came together to pay their respects at a dawn service in Hyde Park on Thursday.

A crowd spanning all ages was greeted by a mild London morning, with some clad in green and gold and others draped in the Australian flag.

Michael Hutchinson, a 29-year-old who moved from Sydney four years ago, said the London Anzac Day service allowed him to carry on a tradition that started when he spent Anzac Day in Gallipoli in 2009.

“Basically my grandfather fought in World War II and Korea so I have always had a deep respect and appreciation for the sacrifice that he and his fellow veterans made,” Mr Hutchinson told AAP. 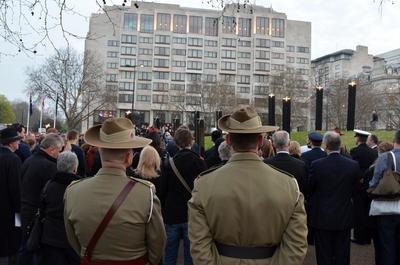 The Duke of Kent was in attendance while Australia’s opposition foreign affairs spokeswoman Julie Bishop laid a wreath during the London ceremony.

Australia’s high commissioner to Britain, Mike Rann, told the gathering the occasion was also about honouring those still fighting for their country today.

“In a time of terrorism, when the enemy is often unknown and unseen, we honour not only those who have fallen over the years but those who continue to bravely serve us in places like Afghanistan and in peacekeeping operations around the world,” Mr Rann said.

“On this day we remember our fallen comrades as the best of our breed, the saviours of all we cherish and the architects of who and what we are.”

A wreath-laying parade and ceremony at the Cenotaph on Whitehall and a memorial service at Westminster Abbey were to be held later on today.

The dawn service is held on alternating years at each country’s memorial, located diagonally opposite each other.

Anzac Day commemorations have taken place in London since 1916.