London Aussies and Kiwis gather to honour the Anzac tradition. 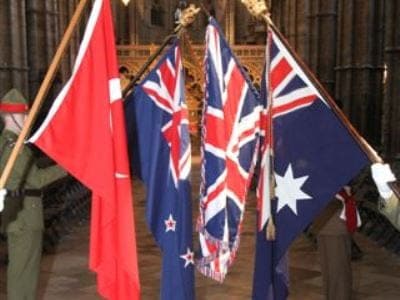 The traditional Anzac Day Dawn Service was held in London this morning, following similar ceremonies around the world.

Aussie and Kiwi expats and various dignitaries and military representatives gathered at Hyde Park Corner at 5am to mark the fateful 1915 Gallipoli landings and pay their respects to armed services veterans who contributed so much to forging the two nations’ identities.

London-based Australians Jessica Farlow, 23, Jess Rainsford, 19, and Tom Mills, 24, were among those honouring the Anzac tradition.

“It’s sort of like a rite of passage for people of our generation,” Ms Farlow said.

In preparation for what is anticipated to be an exceptionally large turn-out for the Anzac Day centenary next year, the 2014 London Dawn Service was held in front of Wellington Arch rather than at the nearby Australian and New Zealand war memorials. Wreaths were, however, laid at both the New Zealand and Australian memorials.

At the time of writing, the Anzac Day Whitehall march and wreath laying service was about to take place, followed by a thanksgiving service in Westminster Abbey.

In France, on the World War I Western Front battleground at Villers-Bretonneux, a crowd of 4500 Australians, Kiwis and French locals watched the dawn service where foreign minister Julie Bishop gave a speech.

Meanwhile, at Gallipoli in Turkey, a smaller than expected crowd of 4400 mostly Australian and New Zealand pilgrims gathered to mark the 99th anniversary of the Gallipoli landing, a year before 10,500 will squeeze on to the site for the centenary.

Veterans Affairs Minister Michael Ronaldson told the quiet, reverential gathering that those soldiers who landed at Anzac Cove 99 years ago were, by their own admission, ordinary men.

“They did not seek glory, nor did they want their actions to be glorified,” he said.

“That these ordinary men, however, did extraordinary things is beyond doubt.”

In Thailand, at the jungle site of the World War II Death Railway, about1200 people, including three Australian former prisoners of war, now in their 90s, marked Anzac Day.