Anti Australia Day graffiti has been sprayed along an 8km stretch of Sydney's Botany Bay foreshore. 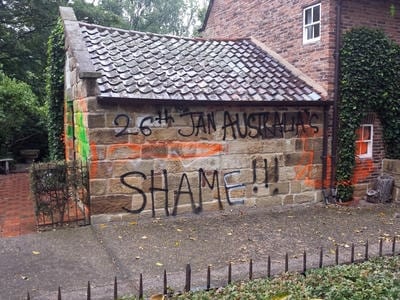 GRAFFITI denouncing Australia Day as “Invasion Day” has been daubed along the foreshore at Sydney’s Botany Bay, angering locals.

Anti Australia Day slogans were painted on retaining walls, toilet blocks and other structures along an 8km foreshore stretch overnight, prompting a council clean-up on Friday.

Botany Bay is where Captain Cook first landed in Australia.

Rockdale mayor Shane O’Brien said he was angry and disappointed on behalf of the local community.

“We’re a very proud multicultural community and we make a point of acknowledging our indigenous history whenever we can and also promoting indigenous culture,” he told Fairfax Radio Network.

“So I don’t think our community deserved this sort of attack and the cost associated with cleaning it up.”

Mr O’Brien said he was also disappointed because he was a big supporter of reconciliation.

“When something like this happens anyone who’s unsure or not really there yet is more inclined to swing the other way.”

“I wonder what goes through the heads of these people when they actually set back their own cause.”

Police are viewing CCTV footage in a bid to catch the culprits.

Vandals sprayed paint on the cottage and smashed a window.

The cottage was built in 1755 in Yorkshire by Captain James Cook’s parents and bought by philanthropist Sir Russell Grimwade in 1933 to be dismantled and shipped to Melbourne. -AAP