‘Alt-right white extremism’ or conservative mobilising: what are CPAC’s aims in Australia?

OPINION & ANALYSIS: Nigel Farage is due to make a return to Australia at this weekend’s CPAC event, alongside Tony Abbott, Raheem Kassam and other right-wing speakers. 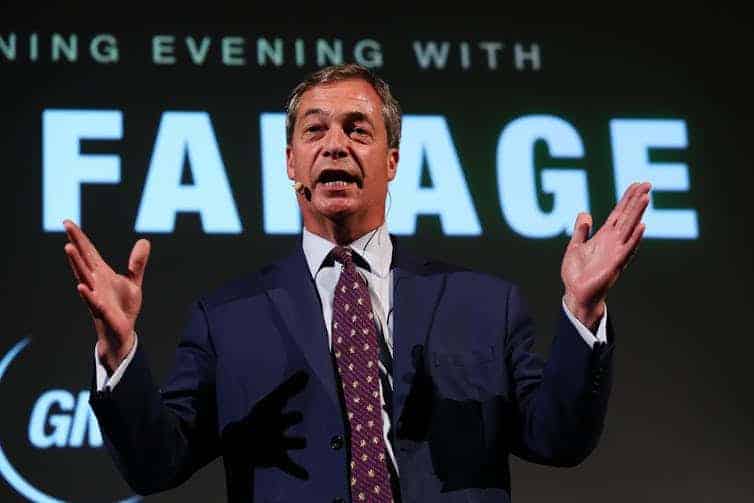 This weekend, the inaugural Australian Conservative Political Action Conference kicks off in Sydney, an event that is causing considerable controversy even before it has begun.

Shadow Minister for Home Affairs Kristina Keneally has called on Prime Minister Scott Morrison to condemn the conference, which she argues imports “alt-right white extremism” from the US. Morrison needs to stand up for Australian gun laws, she says, because of fears that attendees from the US Republican Party will push a pro-gun position while they are here.

CPAC is an influential, annual gathering of conservatives in America with a history dating back nearly 50 years. The conference brings together conservative politicians, advisers, journalists, public commentators, lobbying groups and other public figures. President Donald Trump delivered a two-hour speech at this year’s event, the longest of his presidency.

It has, at times, also included those on the alt-right or extreme-right. And it frequently sparks controversy.

A furore arose at CPAC 2017 when Wayne LaPierre, the head of the National Rifle Association, accused gun control advocates of hating freedom, just days after a mass shooting at a Florida high school.

Richard Spencer, the founder of an alt-right movement that envisions a whites-only state, also frequently attended CPAC before being kicked out in 2017. That year, Steve Bannon, then-head of Breitbart News, gave a rousing speech promoting economic nationalism and the dismantling of the “administrative state”.

The CPAC 2019 travelling roadshow coming to Australia also includes some familiar names in far-right politics. Nigel Farage, the former leader of the UK Independence Party, and his controversial adviser Raheem Kassam will be in attendance. Keneally says Kassam has

an extensive history of vilifying people on the grounds of their race, religion, sexuality and gender.

Other speakers include Fox News presenter Jeanine Pirro, who was recently rebuked by her own network over a comment she made about Somali-American Representative Ilhan Omar.

Unlike CPAC in the US, the Australian event is not primarily a gathering of politicians from one political party. Only two current sitting members from the Liberal Party are billed to speak – MP Craig Kelly and Senator Amanda Stoker – alongside former Prime Minister Tony Abbott, conservative media commentators, and a few elected representatives from minor parties.

Farage made a controversial tour of Australia last year, during which he warned the Liberal Party to pay more attention to “those who actually want patriotic values” and more to be done about immigration, or risk being washed away.

He also praised One Nation leader Pauline Hanson for speaking against Islamism, though he warned against taking on the “holy war against the religion of Islam”.

Farage was one of a series of controversial far-right speakers to visit Australia in recent years, along with Milo Yiannopoulos, Stefan Molyneux and Lauren Southern.

And these appearances have at times stirred up hate. During a sold-out event in Sydney, Molyneux and Southern made numerous derogatory comments about Indigenous Australians.

There is no doubt these visits helped spread a far-right, anti-immigration and anti-Islam message in Australia. Southern, for example, is credited with sparking Hanson’s failed attempt to pass an “It’s OK to be white” motion in the Senate.

Will Australian CPAC be different?

This is also not the first time that such a gathering of conservative political speakers has been held in Australia. CPAC co-host Andrew Cooper, a successful online retailer and entrepreneur, has organised and funded similar events for a number of years under the “LibertyWorks” banner.

LibertyWorks is against government regulation and state involvement in “our economic and personal lives”, anti-discrimination laws such as 18C of the Racial Discrimination Act, political correctness, and the curtailing of free speech. It is part of a conservative network of think tanks and lobby groups, such as the Australian Institute for Progress, which frequently share staff and board members.

Operating within a libertarian framework, LibertyWorks supports the legalisation of cannabis, but opposes plain packaging on cigarettes. One of the key themes addressed at its annual conference, LibertyFest, has been how to protect religious freedom with the advent of marriage equality.

LibertyFest has been held in Brisbane since 2017 and in Perth in 2019, featuring speakers like One Nation Senator Malcolm Roberts, anti-feminist Daisy Cousens, climate denier Ian Plimer, anti-mosque campaigners from Safe Communities Australia, and conservative Christian James Fox Higgins, who told a Brisbane crowd at this year’s event:

Bernard Gaynor, a far-right blogger who was dismissed from the army for anti-gay comments, won a free speech award at Brisbane LibertyFest 2018. Another surprise guest that year was neo-Nazi Blair Cottrell.

What is CPAC Australia aiming to do?

CPAC’s aim in America is to build lobbying power and develop grassroots campaigning for Republican candidates. Much of this effort is focused on fundraising and getting Republican voters to turn out for elections.

As Australia has different rules regarding campaign donations, no directly elected head of government, and compulsory voting, it stands to reason the Australian CPAC must have different goals.

The Australian CPAC organisers have adopted the slogan “Protect the Future – fight on”. This makes sense because a constant theme at LibertyFest is that conservatives and libertarians are losing the political and culture wars to the left.

In particular, many LibertyFest speakers see dangers in the increasing regulation of the economy and creeping power of the state. They have called for slashing funding to the ABC and other cultural institutions that rely on taxpayer funding. The CPAC event webpage provides a clear list of the other dangers: militant unions, the Greens, socialism, and GetUp.

Cooper, the founder of LibertyWorks and co-host of CPAC, has described his philosophy as “live and let live”, but he is firmly committed to radical change, such as winding back the welfare state, reducing funding for state schools, and reducing taxes.

During a LibertyFest panel in 2017, he spoke of the need to mobilise conservative voters on these issues in Australia:

Our belief is to motivate people to change their vote, or to get them to ‘get up’ or start something. They’ve got to have some sort of philosophical belief system that provides that motivation.

But does this necessarily include alt-right viewpoints? Perhaps not, but there are worrying signs.

Certainly, some of the speakers coming to CPAC have expressed anti-Islam and anti-immigration viewpoints in the past – and they’re likely to do so on the weekend. Other speakers will surely attack the usual targets of conservatives in Australia: the media, feminism, the regulation of hate speech and discrimination, and so on.

The likely outcome of CPAC Australia is a strengthened conservative lobbying force that uses social issues in a culture war to achieve libertarian economic goals. If so, Australian politics could become more divisive, as views once considered extreme are further incorporated into the lobbying toolkit.